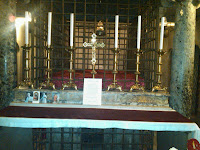 Quam clarificata est Jerosolyma Stephano, tam illustris fieret Roma Laurentio ("As Jerusalem is made glorious by Stephen, so Rome is made illustrious by Lawrence"). So said Saint Leo the Great preaching on today's feast of the great Roman deacon-martyr Lawrence. During my time in Rome last year, I got to visit three Roman churches named for Saint Lawrence - San Lorenzo in Lucina, San Lorenzo in Panisperna (honoring the site of Lawrence's martyrdom), and the great Basilica of Saint Lawrence Outside the Walls, where Lawrence is buried. (Photo is of the altar at the site of his burial).
Christian Rome produced many martyrs - among them Pope Sixtus II and four other Roman deacons who were martyred just four days before Lawrence in 258 during the persecution of Emperor Valerian. What made Lawrence stand out so?
As deacon, Lawrence was apparently in charge of the material possessions of the Roman Church and of its alms for the poor. According to tradition, after the execution of Pope Sixtus the Prefect demanded that Lawrence turn over the Church's treasure. Supposedly, Lawrence quickly distributed as much of the Church's property as possible to the poor and then went to the Prefect and presented to him the poor. "Behold in these poor," Lawrence said to the Prefect, "the treasures I promised to show you."

The site of Saint Lawrence's burial, the Basilica of Saint Lawrence Outside the Walls (one of the traditional seven "Pilgrimage Churches" of Rome), is located in the traditionally working-class neighborhood that suffered a direct hit during the American bombing of Rome in July 1943. That event famously brought Pius XII rushing there, with money for local victims.(That event is memorialized there in this monument to Pope Pius as "Defender of the City").

In the late 20th century, it became quite common, especially among professed Religious, to talk about a "preferential option for the poor." Lawrence lived it. Hence his standout status in 3rd-century Rome - and a good reason why we remember (and hopefully imitate) him even today.