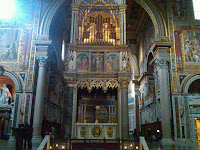 At Rome, in the time of Nero, the commemoration of many holy martyrs, who were accused of having set fire to the city, and cruelly put to death in various manners by the emperor's order. Some were covered with the skins of wild beasts and lacerated by dogs; others were fastened to crosses, others again were delivered to the flames to serve as torches in the night. All these were disciples of the Apostles, and the first fruits of the martyrs, which the Roman Church, a field so fertile in martyrs, offered to God before the death of the Apostles.

So reads the entry for the Protomartyrs of the Holy Roman Church on June 24 in the traditional text of the Roman Martyrology. The anonymous protomartyrs were the first Roman martyrs murdered by order of the Emperor Nero in the aftermath of the Great Fire which took place July 18-19 in the year 64. In response to the accusations that he was somehow responsible for the fire, Emperor Nero blamed the calamity on the city's small Christian community, initiating the first imperial persecution of the Christians. Eventually swept up in that persecution were the great Apostles Peter and Paul, whose martyrdom 1950 years ago in the year 67 the Church commemorates every year on June 29. As a sort of sequel to that celebration, the contemporary Roman calendar commemorates all the other early Roman martyrs today.

As the familiar story of Saint Stephen (Acts 6-7) illustrates, the model Christian martyrdom recognizably imitates Christ's own passion and death. On the other hand, the more politically ambiguous motives of some modern persecutors and the consequent apparent politicization of the concept of martyrdom (e.g., the beatification of Oscar Romero who, while widely venerated as a martyr, was murdered, it could be argued, mainly for political motives, because of his opposition to the ruling regime) is not really so uniquely modern as we may suppose. After all, Saint Thomas Becket was widely seen as a martyr immediately after his manifestly politically motivated assassination in 1170 - and was quickly canonized as a martyr in 1873.  And Saint Thomas Aquinas himself considered the question of whether dying for a human good could qualify as martyrdom, suggesting that it could in so far as the human good was referred to God.

The fact that we continue to argue and debate these issues and that the requisites for recognition as a martyr may have evolved somewhat to reflect the Church's changing challenges really highlights the central significance of the martyrs in the life of the Church. It is often pointed out how the past century has seen more martyrs than ever before. But all martyrs - ancient or modern, anonymous or famous - are part of an ongoing experience of the triumph of God's heavenly power and grace over God's earthly human and political opponents and so will always be worthy of special celebration in the Church's liturgy.

(Photo: The Papal Altar at the Lateran Basilica, whose baldacchino enshrine the reliquaries of the heads of the Apostles Peter and Paul)
Posted by City Father