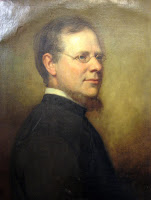 160 years ago today, Servant of God Isaac Hecker (the future founder of the Paulist Fathers) had an audience - his first - with Blessed Pope Pius IX. A Redemptorist priest from the far-away and predominantly Protestant United States (and a convert himself), Hecker had run afoul of his religious superiors and been expelled from his community. Courageously appealing against that action to the highest authority in the Church, Hecker sought not only to clear his name but also to share his surprisingly confident beliefs about Catholicism’s prospects in America and American society’s potential receptivity to Catholicism.

“The conversion of the Americans would be very difficult,” the Pope suggested, because “they are so engrossed in worldly pursuits and making money.” Hecker did not try to deny that obvious observation, but instead sought to interpret it in the best possible light, comparing the young country to “the young father of a family, who is furnishing his house.” Pius himself was quite prepared to acknowledge that Americans could also be generous, He was aware of “the bright side as well as the dark side of the American character.” But in the United States the Pope feared something even darker than its capitalist excesses. He referred to the country’s contentious politics. He worried that “in the United States there exists too unrestricted liberty” and a partisan spirit “in which parties get each other by the hair.” To this, Hecker confidently replied. “there is also the Catholic truth, which, if once known would come between these two parties and act like oil on troubled waters.” [“From a letter to the American Fathers, dated Rome, December 22, 1857]

Hecker’s confidence about Catholicism’s prospects in America and American society’s potential receptivity to Catholicism animated his life-long mission. In one of his last Catholic World articles, published in the year he died, Hecker quoted an anonymous acquaintance, who said “he didn’t care for union of church and state if he could have union of church and people.” [“The Mission of Leo XIII,” Catholic World, 48, 1888] Such comments convey how important the religious transformation of society and culture was for Hecker, and how he confidently expected this to accomplish what others looked for in politics.

Like the 19th-century’s most famous observer and analyst of Jacksonian American society and institutions, the French nobleman Alexis de Tocqueville (1805-1859), Hecker appreciated the problem posed by the fundamentally fragmented character of American society with its fragile connections between individuals, and the dilemma of how to create a community capable of uniting individuals consistent with their freedom. In 19th-century Europe, the Church was struggling to survive as an institution against an increasingly liberal political order. It sought to counteract the social fragmentation associated with liberalism and to reconnect increasingly isolated individuals into a community by preserving, repairing, or restoring religious bonds. The way to do this was to assert the Church’s traditional claims to authority as vigorously as possible and to insist upon its political privileges and institutional rights in relation to the state. In contrast to that time-honored political approach, Hecker saw a social solution in which Americans, converted to Catholicism as the answer to their deepest human aspirations and thus opened up to the outpouring of the Holy Spirit in their lives, would be empowered, to combine true religion and democratic political institutions.

What to make of Hecker's astonishingly hopeful prediction 160 years later?

Karl Marx being but the most infamous example, 19th-century thinkers tended to extrapolate from their contemporary experience and make predictions based on that. Hecker had faith, obviously, in the truth of Catholicism and in its unique ability to respond to Questions of the Soul and The Aspirations of Nature (the titles of his two apologetical books composed in the 1850s). Based on his empirical experience of New England Protestantism, he also confidently concluded that American Protestantism was inevitably doomed to disappear. However, Hecker’s understanding of Protestantism was largely derived from his early experience with the Transcendentalists. He had assimilated Transcendentalist stereotypes about Calvinism but seems to have had little or no direct familiarity with classical Calvinism or with the writings of Calvin himself. More to the point, as even so sympathetic an account as that of Paulist Father James McVann acknowledged, Hecker’s “facts and figures mostly took account of a decline in Eastern Massachusetts, without considering the strong roots of Protestantism in other parts of America, which his travels South and West should have shown him.” [The Paulists (unpublished), p. 144.].

Having himself experienced the divided and fragmented character of American Protestantism, Hecker always appreciated the importance of authority in the Church, as the divinely sanctioned providential alternative to the Protestant principle of individual interpretation.  For Hecker, “the test of our being directed by the Holy Spirit, and not by our fancies and prejudices, is our filial obedience to the divine external authority of the Church. … The measure of our love for the Holy Spirit is the measure of our obedience to the authority of the Church.” [“The Safeguards of the Paulist,” PV, pp. 141-142].. The internal order of the visible institutional Church was, for Hecker, the divine sanctioned means for the fulfillment of Christ’s life and mission on earth, pouring the oil of the Holy Spirit on the troubled waters of the world

A century and a half later, however, the northern “Mainline Protestantism,” with which Hecker was familiar, does in fact appear to be in serious, perhaps terminal, decline in the United States. And the principle of private judgment and lack of doctrinal authority that Hecker lamented in the American Protestantism of his time can certainly be blamed for much of this. While Hecker’s limited understanding of American Protestantism dramatically failed to appreciate its capacity to revitalize itself precisely at its own evangelical roots,  it is also seems to be the case that the Catholic philosophical and theological tradition increasingly seems to be the resource most able to provide a cultural and political framework in response to the contemporary challenges of post-modern secularism. Whether, in this less fully institutionalized form, the oil of Catholic truth can calm the troubled waters of American life, however, still remains very much open to question, given the changing character of those troubled waters.

The political polarization (about slavery) in Hecker's 1850s and 1860s led to a full-scale sectional civil War. On TV recently, journalist Carl Bernstein referred to our contemporary political polarization as a "cold civil war." Six months ago, however, David French suggested that what we are experiencing is more like "a national divorce" than a civil war. In support of this he cites two trends - "negative polarization" and "matching." The former reflects the fact that today "Americans belong to their political 'tribe' not so much because they love its ideas but rather because they despise their opponents." The latter refers to the way we "increasingly live separate lives - living in separate locations, enjoying separate media, and holding separate religious beliefs."


The viability of Hecker's vision - whether and how "the Catholic truth, which, if once known would come between these two parties and act like oil on troubled waters” - is thus a vital question for our troubled time, whether we call it a "cold civil war" or a national "divorce," and a question I hope to consider further in the new year.
Posted by City Father