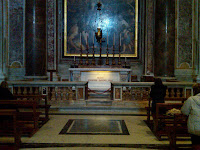 Today would have been the 100th birthday of Karol Wojtyla, Pope John Paul II, born on this day in the newly established post-World War I Polish state in 1920. He died 84 years later on April 2, 2005, having served as Pope from October 16, 1978, a papacy of more than 26 years. Because of the pandemic, his fans must settle for a somewhat muted celebration. Pope Francis will mark the occasion by celebrating Mass at his tomb in Saint Peter's Basilica (Photo taken by me in 2012).

History, which Pope Saint John XXIII famously called "the greatest of teachers," tends to take the long view. It may simply be too early, historically speaking, to come to any definitive assessment of John Paul II and his pontificate. One need only compare how US Presidents have been assessed during and at the end of their terms with how history has reassessed them. (Both Truman and Eisenhower, for example, have fared much better from the vantage point of history than they did at the end of their terms.)

By the sheer force of his personality and the unique circumstances of his nationality, John Paul inevitably played a larger-than-life role on the world stage. He did much to create our contemporary image of the Pope as someone whose job includes being successful as a media celebrity. There are obvious advantages to this for the Church's public presence in the world. It also reinforces the contemporary centralization of the Church, an almost inevitable modern phenomenon, but which is historically somewhat unique and which, while obviously beneficial in some respects, may prove less so in others.

The first decade of the Polish Pope's pontificate was, unsurprisingly, dominated by the critical final years of the Cold War. In retrospect, it seems almost inevitable that the Soviet system was destined to collapse eventually, with or without a Polish Pope. Andrei Amalrik's Will the Soviet Union Survive Until 1984?, which I read in college, was written well before most people had ever heard of Karol Wojtyla. Amalrik got some details wrong (including, obviously, the date) but was otherwise on target. Instead of the war he predicted with China, the Soviets undermined themselves with a disastrous was in Afghanistan.

Even if the Soviet system was perhaps on the road to self-destruct eventually, its immediate failures, for example, at Chernobyl certainly accelerated the process. Even so, the historical confluence of particular personalities played a key part in the process. Most notable, of course, but obviously not inevitable, was Mikhail Gorbachev - as was Margaret Thatcher's embrace of him. That said, the Polish Pope played some part for sure in how the process played out - particularly the part Poland played in accelerating that process. While he certainly did not single-handedly overthrow the Soviet system, he was a player, who obviously mattered enough to warrant the attempt to assassinate him. As Tony Judt, conceded in The New York Review of Books in 1996: "In any history of the last years of the Cold War, or of the collapse and fall of the Soviet Union, the pope will obviously figure prominently, not least for the part played by Solidarity and the Polish opposition in the undermining of Communist credibility."

However one evaluates John Paul II's contribution to the collapse of communism, once that had happened his influence in world politics diminished significantly. For the rest of his reign (and from a religious perspective even for the first part of his pontificate) his dominating role within the Church is what matters.

1978 seems so distant that it may be hard to recall how depressed the Church's internal life and overall situation seemed at that time - at least in the West. (What was then called the "Third World" was a somewhat different story.). Young by papal standards, an exotic foreigner with a dramatic flare for showmanship, Pope John Paul II seemed to be just what the doctor ordered to strengthen the Church's self-confidence both in her inner life and in her posture toward the world. There can be no doubt that something like that happened, although the long-term significance of the change must remain open to debate.

In retrospect, what stands out is how personality-driven that pontificate was and how little it accomplished institutionally. The much noted contemporary symbol for that was the Pope's enormous personal popularity, especially with the young, which did not, however, translate into a long-term institutional recovery of strength for the Church - either in its internal life or in its public position in the world. (Here again, the "Third World" was different.)

Attending World Youth Day in 2005, the first such extravaganza after John Paul's death, I was struck by how the new Pope Benedict XVI seemed to be trying to get away from a focus on the personalty of the Pope and focus more on the Church. This more institutionalist orientation obviously was more in keeping with Benedict's more reserved personality. If in retrospect Benedict's pontificate appears as a modest interlude between the two intensely personality-focused pontificates of John Paul II and Francis, that probably reflects the celebrity-orientation of  contemporary culture and the correspondingly diminished standing of all contemporary institutions, religious and secular.