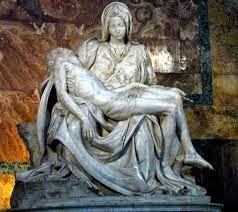 Alone among the Lenten weekdays, today's Mass for this last Friday of Lent provides a choice of two alternate collects. This is a vestige - the only visible vestige - of the old Feast of the Seven Dolors which used to be kept on this Friday, before being reduced to a Commemoration in last pre-conciliar liturgical reform in 1960. A duplicate feast, that of the Seven Sorrows on September 15, survived the reforms, although downgraded in rank and now renamed Our Lady of Sorrows, thus eliminating any reference to the number seven. Still, whenever I think of Our lady of Sorrows, I unfailingly recall the many popular portrayals of Mary pierced with seven swords! I remember too a beautiful church I once visited in a crowded urban neighborhood which had a statue of Mary pierced with seven swords atop its golden dome.

The illustrious 20th-century liturgist Pius Parsch, reflecting the antiquarian attitudes so prevalent in the pre-conciliar liturgical movement, contrasted "the older and more austere Lenten Mass" and the "newer, more spirited one devoted to Our lady's Seven Sorrows." Actually, his comparative analysis of the two liturgical tendencies reflected in the older liturgical tradition for this Friday is, as he himself wrote, "instructive for anyone who desires to penetrate more deeply into the spirit of the Church's liturgy." He argued that, whereas the traditional ferial Mass presents Christ's passion prophetically, figuratively, and historically, in the festive Marian Mass "sentiment and emotion is strong."

Such distinctions and discussions all seem so obsolete now in the light of the liturgical reform's abrupt about-face in the post-conciliar period, when so much of the historic heritage and spirituality of the Roman Rite was abandoned for a contemporary sentimentality that would make the supposed sentimentality that pre-conciliar liturgists discerned in the old feast of the Seven Dolors appear austere in retrospect!

That the reformed Missal retains a Marian collect today is, therefore, especially admirable. In actual fact, however, the tradition of identifying with Mary in contemplating her Son's Passion, to which that collect refers, really occurs for most people, if at all, in such devotional contexts as the praying of the Sorrowful Mysteries of the Rosary and the Stations of the Cross, where traditional texts for the Stations (e.g., the familiar meditations and prayers composed by Saint Alphonsus Liguori) highlight the contemplation of the Passion through the experience of Mary at the 4th and 13th stations. The many portrayals of the Pieta in Christian art testify to the enduring popularity of the image of the Sorrowful Mother in popular devotion - a devotion which renders the human dimension of the Passion story especially accessible.

Literarily, the highlight of the old Feast of the Seven Dolors (and the still observed other feast of Our Lady of Sorrows in September) is, of course, the (now optional) Sequence of the Mass, the great Stabat Mater, which Parsch acknowledged as "certainly one of the finest religious poems from the Middle Ages." Fortunately for the Stabat Mater - and thus for us - that Sequence has long served as the most common and popular processional music for the Stations of the Cross. And so it has survived in popular awareness and devotion, despite the adverse musical tendencies of the past five decades.
Posted by City Father