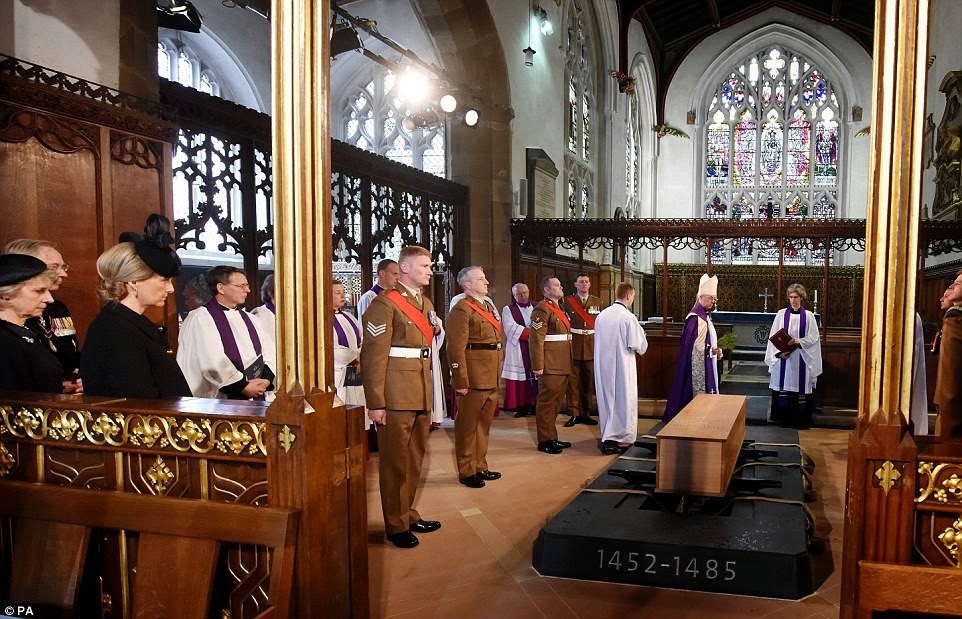 “Today, we recognize a king who lived through turbulent times and whose Christian faith sustained him in life and death.” With those precisely chosen words, Queen Elizabeth II acknowledged both the significance and the ambivalence about the re-burial of one of her more notorious predecessors, King Richard III (1452-1485), who, having usurped the throne from the rightful King Edward V (whose sister Elizabeth eventually became the current Queen's ancestor), has historically been blamed for the subsequent disappearance (and presumed murder) of Edward and his brother Richard, the famous "princes in the tower."

We will probably never know the full story of the "princes in the tower," whose presumed murder was considered inordinately wicked even by the standards of that troubled time, famously known as "the Wars of the Roses." It was Richard's defeat and death that brought those wars to an end and made possible the restoration of domestic peace in England under Henry VII and his tudor dynasty. (Of course, that also set in motion the tragic events that led to the English Reformation under Henry VIII.)

On the other hand, Richard has long had his defenders. His short reign was considered a relatively just one. Had circumstances been different and his accession more legitimate, he might well have been one of England's better medieval kings. As it was, he was the last English king to die in battle. (The last British king to die in battle would be Scotland's James IV, who died at the battle of Flodden in 1513, defeated by the army of English his brother-in-law, Henry VIII).

In laying Richard to rest today, giving him the honorable burial political circumstances denied him in 1485, his medieval subjects' modern descendants have been able to revisit and reflect upon that critical juncture in the political (and religious) history of the English speaking world and the abiding significance of that history for us all. In the process, the fundamental Christian duty to pray for the dead was also fulfIlled.

It was in one sense perfectly reasonable that the current incarnation of the English Church (represented by Anglican Archbishop of Canterbury Justin Welby) should perform the final interment. But it was even more appropriate that the representative of the historic and universal Church of which Richard himself and all his subjects were then members also participated, offering a Requiem Mass for the king earlier in the week. Wearing vestments from King Richard III's era, the Catholic Archbishop of Westminster, Vincent Cardinal Nichols, celebrated Mass at a local Dominican Priory. There he spoke pointedly and eloquently of the true purpose of this or any Christian funeral:

The prayer we offer for him this evening is the best prayer there is: the offering of the holy Mass, the prayer of Jesus himself, made complete in the oblation of his body and blood on the altar of the cross, present here for us on this altar. This is the summit of all prayer, for it is made in and through the one Person, the eternal Word, through whom all created beings have life. It is a prayer that arises from the very core of creation, the cry of the Word returning to the Father and carrying within it the totality of that creation, marred and broken in its history, yet still longing for the completion for which it has been created. It is, therefore, such an important Catholic tradition to seek the celebration of Mass for the repose of the souls of those who have died, especially for each of our loved ones whose passing we mourn. Let us not forget or neglect this great gift.