“In this free land by Thee our lot is cast”

This past Sunday, in anticipation of Independence Day, we sang one of my favorite American Protestant patriotic hymns, God of Our Fathers, written by a New Hampshire Episcopal priest to commemorate the centennial of the Declaration of Independence in 1876 and later set to a new hymn tune called “National Hymn.” Protestant hymnals traditionally facilitate congregational singing by setting multiple hymns with different sets of words to familiar “hymn tunes.” In this case, the title of the “hymn tune” perfectly fits both the hymn’s majestic melody and its solemnly stirring words. Like so many of the classic Protestant hymns, God of Our Fathers combines good music, good English, and good theology. 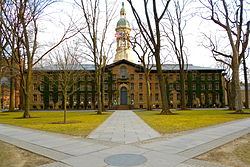 The first time I ever heard God of Our Fathers was actually at a Princeton University commencement in the mid-1970s, a setting that I suppose may have further associated the hymn with memories of a particularly happy time in my younger life. In the tradition-encrusted musical repertoire that then still accompanied such ceremonies, the hymn was played during the procession as the President of the University, wearing his presidential gown and train, formally entered the commencement area in front of Nassau Hall (photo) near the famous “Stamp Act Sycamores” (planted in 1766 to celebrate the repeal of Parliament’s Stamp Act)

As befits good Christian hymnody, God of Our Fathers begins with praise of the awesome divine majesty, what obviously ought to serve a the starting point of all authentic prayer:

God of our fathers, whose almighty hand
Leads forth in beauty all the starry band
Of shining worlds in splendor through the skies
Our grateful songs before Thy throne arise.

Then the second verse announces the hymn’s particular, patriotic motive of national thanksgiving for the blessing of a free country governed and guided by God’s law:

Thy love divine hath led us in the past,
In this free land by Thee our lot is cast,
Be Thou our Ruler, Guardian, Guide and Stay,
Thy Word our law, Thy paths our chosen way.

Finally, following the traditional dynamic of Christian prayer, in the 3rd and 4th verses the hymn moves from praise and thanksgiving to earnest petition.

From war’s alarms, from deadly pestilence,
Be Thy strong arm our ever sure defense;
Thy true religion in our hearts increase,
Thy bounteous goodness nourish us in peace.

Refresh Thy people on their toilsome way,
Lead us from night to never ending day;
Fill all our lives with love and grace divine,
And glory, laud, and praise be ever Thine.

Fitting sentiments for Independence Day any year, but especially in this time of national testing and self-examination when a trivial, anti-social notion of "freedom" as meaning little more than low taxes seems to predominate one side of our national conversation, and as the historic and essential role of religion in our nation's public square is increasingly disparaged and challenged on the other side.