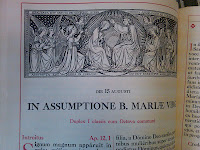 The early Christians, however, had their own alternative version of the story, from which we just heard in today’s 1st reading [Revelation 11:19a; 12:1-6a, 10ab]. The child destined to rule all the nations was not Apollo, of course, but Christ.

The Christian version of the story expressed the hope in the future that is fundamental to Christian faith. But in the actual world of now, in which death always appears to have the final word, what we hope for appears at best as a hope, at worst just a wish.

But the wish has been transformed into hope by Christ, the first of all the human race to be raised from the dead [1 Corinthians 15:20]. Jesus Christ is indeed, as Saint Paul teaches, the new and definitive Adam. On this basis the 2nd Vatican Council reminded us that in Christ is to “be found the key, the focal point, and the goal” of every human being “as well as of all of human history” [Gaudium et Spes, 10].

What we celebrate today, the Assumption of the Blessed Virgin Mary - the ancient belief of the Church “that the Immaculate Mother of God, the ever Virgin Mary, having completed the course of her earthly life, was assumed body and soul into heavenly glory" [Pius XII, Munificentissimus Deus] – represents one further step towards the final fulfillment of God’s great plan for the human race.

In the Old Testament, the Ark of the Covenant was where God dwelt directly with his people. Both Mary and the Church are arks of God’s new covenant. Mary is already with God and can be seen there with the eyes of faith by the Church, which fervently hopes to follow her there, even as we strive to imitate her here and now. On earth, Mary linked Israel and the Church. Assumed into heaven, she now links the Church as we now are and the Church as we then hope to be.

Homily for the Solemnity of the Assumption of the Blessed Virgin Mary, Immaculate Conception Church, Knoxville, TN, August 15, 2012.
Posted by City Father