The Kingdom is at Hand 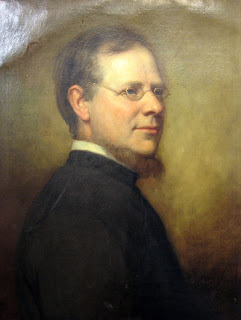 Exactly 155 years ago today, on July 7, 1858, Father Isaac Hecker and three other priests founded  the “Society of Missionary Priests of St. Paul the Apostle,” known ever since as “The Paulist Fathers”– the first men’s religious community founded in the United States.  Three days later, the Archbishop of New York assigned them the care of a new parish on Manhattan’s west side – placed, like the Paulist Fathers themselves, under the patronage of Saint Paul the Apostle. In addition to serving as Superior of the new missionary community, Father Hecker also became the first pastor of the new parish, which gave him the opportunity immediately to start implementing his vision for the Paulists in a pastoral context.  Hecker’s vision of the mission of The Paulist Fathers was a monumental one – the conversion of America to the truth of the Catholic Faith.  He envisioned his Paulist parish as simultaneously a vibrant Catholic parish reaching out to evangelize locally and a center from which the Paulists would reach out in mission to the entire country.


Jesus’ action in today’s Gospel [Luke 10:1-12, 17-20] in sending the 72 disciples on a kind of practice run for what they would later be doing full-time after his ascension reminds us that evangelizing (as Pope Paul VI expressed it so well) “constitutes the essential mission of the Church” – in every age and in every society, in the 19th, 20th, and 21st centuries no less than in the 1st, in Hecker's America and today's East Tennessee no less than in the ancient Roman Empire.


Jesus, we are told, sent the 72 in pairs – not as solitary individuals, but in pairs. Ours is a culture which places a lot of emphasis on our private individual lives and freedoms. But the Gospel reminds us that we are not isolated, solitary selves, but a community of faithful people, formed by the Holy Spirit into one Church, the body of the Risen Christ, to continue his mission in every town and place. Jesus commanded his disciples tp make a difference in their world. So, if we really mean what we say we believe, then what we do in our many relationships and multiple commitments – in our families and among friends, at work or at school, in our society and in the wider world – must make a difference and be recognizable as such. Jesus expects us to be on the same side with him – on the side of God’s kingdom. Being on God’s side, having our names written in heaven (as Jesus says), frees us to join Jesus in making a real, recognizable difference in an always challenging, sometimes very welcoming, but also sometimes sadly inhospitable world. It frees us to tell – and retell –the story of Jesus, to speak his word to any and all, so we too can say to this world we love: “The kingdom of God is at hand for you.”


I’ve long been especially fond of this Gospel which was read at my ordination as a priest at the Paulist parish in Toronto, Canada, one of the many places Isaac Hecker’s community has sought to imitate the 72 disciples in the Gospel in  announcing : “The kingdom of God is at hand for you.”


From 1900 through 1954, for example, the Paulists undertook extensive missionary work in Tennessee. And, in 1973, the Paulists came to Knoxville. So summer marks the 40th anniversary of Paulist ministry here at Immaculate Conception University Parish.


As a result, all of us at Immaculate Conception now share the mission of the Paulist Fathers in the mission of the Church. This includes a commitment to evangelization in all its forms, a mission both within and beyond the parish community to draw people of all ages and backgrounds to Christ and his Church, especially those without faith or without a consistent place of worship, or with fragile or minimal identity or connection with Church, or who have withdrawn from the community of the Church – all of whom need to hear Jesus’ message: “The kingdom of God is at hand for you.”
Homily for the 14th Sunday in Ordinary Time, Immaculate conception Church, Knoxville, TN,
July 7, 2013.
Posted by City Father