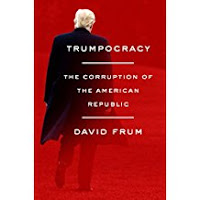 A decade ago, who would have thought that "conservatives" and Republicans would seem to be okay with Russian misbehavior but be filled with righteous indignation against the FBI? Such is the strange world we now inhabit - in consequence of the presidency of Donald Trump and the underlying evolution of Republican tribalism that facilitated his assent. One of the leading "conservative" figures who opposed Trump's rise - and has continued to oppose Trump since his election - is David Frum, onetime speechwriter for President George W. Bush, now senior editor at The Atlantic, and author of Trumpocracy: The Corruption of the American Republic (Harper Colins, 2018).

Corruption in ordinary English often refers to financial chicanery, but it also can refer more classically to the  undermining of representative constitutional institutions by authoritarian (particularly "populist") institution-demeaning authoritarian-type politicians.  Frum is a classic "conservative" constitutionalist. Hence his focus is primarily on "corruption," institutionally understood - on how democracy "dies by degrees."

Appropriately, therefore, Frum begins by recalling modern, pre-Trump, political rule-breaking, undermining what Frum considers the foundation of constitutional democracy "a commitment first and foremost to the rules of the game."  Frum's examples include Republican threats not to raise the debt-ceiling, President Obama's unilateral move on DACA, and, of course, the conspiratorial claim that President Obama was not born in the U.S., which, Frum suggests, "revealed that as the country diversified, its conservatives would insist ever more militantly that no matter who might reside within the United States, the country's institutions and identity should belong only to those recognizably like them." As a "conservative" intellectual, Frum is very sensitive to how little Trump has delivered "by way of an affirmative conservative agenda," but how his supporters are instead "locked in by their cultural grievances," by Trump's "successful exploitation of conservative anger and alienation."

Frum traces the process by which "Enablers" and "Appeasers" facilitated Trump's political rise and then considers the consequences in chapters charmingly entitled "Plunder," "Betrayals," "Enemies of the People," "Rigged System," and "America Alone," chapters titles which effectively summarize their content. Frum's primary concern is institutional and constitutional damage. So (in the chapter "Autoimmune Disorder") he also worries when, to prevent presidential misuse of power, other abuses and norm-breaking may come to seem acceptable, with long-terms harmful consequences

Of course, Trump did not rise to power primarily because of anyone's disenchantment with traditional constitutional norms. He rose to power primarily by his successful exploitation of the contradiction that has long been at the heart of the modern Republican party, which, as Frum recognizes, has been "built on a coalition of the nation's biggest winners from globalization and its biggest losers. The winners wrote the policy; the losers provided the votes. Wile the party elite coalesced upon more immigration, less secure health coverage, and one more Bush, the rank and file were frantically signaling: less immigration, better health coverage, and no more Bushes." This insight is so important, I think, because the institutional and constitutional concerns that excite and inspire Frum's panic will never override ordinary people's anxiety and anger - as the history of populist authoritarianism illustrates. In his chapter, rightly entitled "Resentments," Frum quotes Dale Beran: "Trump supporters voted for the con-man, the labyrinth with no center, because the labyrinth with no center is how they feel, how they feel the world works around them."

This is notably relevant in relation to religion. In the late 20th century, "conservative" religion seemed to have been captured by the political right. More recently, however, religion seems increasingly to be in political eclipse. How else to interpret the supposedly religious voters' rejection of the lifelong, devoted Methodist Hilary Clinton in favor of Trump? Frum quotes an acquaintance's observation that Trump is "the first postreligious conservative of my lifetime. The first who doesn't hate gays, doesn't care if women have abortions - the first who talks about things that matters now."  Central to the transformation of American "conservatism" that has empowered Trump has been "this stripping away of religiosity, to reveal a politics of resentment and domination ungrounded in any traditional moral claim."

Related to this is another significant insight of Frum's, which is how Trump has "accelerated the divorce of political power from cultural power," as illustrated in the contrast between the Republicans of the 1920s, who "drew strength from the country's more economically and culturally dynamic places" and the opposite situation today. Frum's fear of a conservative rejection of democracy pushes him to advocate for an alternative "conservatism that  can not only win elections but also govern responsibly, a conservatism that is culturally modern, economically inclusive, and environmentally responsible, that upholds markets at home and US leadership internationally."

Frum notes that baby boomers have become more "conservative" (42% so labeling themselves in 2011 as opposed to only 35% in 2000). But their "conservatism" is neither pro-business nor anti-government, but rather what Frum calls "the politics of generational self-defense."

But what about "conservative" ideological self-defense. Frum is strongly committed to constitutional and democratic norms; but as the contemporary conflict over voter-suppression, for example, illustrates, the "conservative" threat to traditional constitutional and democratic norms is a real one and one independent of Trump. As Frum admits, "the great threat to constitutional democracy has not been the demands for largesse by the many, but the fears for their property of the few."

What might Frum's analysis suggest for the primary policy issue of the moment - immigration reform? "in a multiethnic society economic redistribution inescapably implies ethnic redistribution," writes Frum, who notes the obvious "reality that human being most willingly cooperate when they feel common identity." It seems hard to avoid the conclusion that part of any process of rebuilding political and cultural trust in our society may require some lowering of the temperature on the immigration issue through some at least temporary reforms that reexamine the immigration policy priorities of the last half century. Whether and  how that can be accomplished in a way which both calms the cauldron that has been stirred by the economic and cultural costs of immigration without losing all the incontrovertible economic and cultural benefits of immigration remains to be seen.

Frum's final chapter ("Hope") considers what "gifts may be gained from this bad moment in American politics." Most obviously, Trump the candidate highlighted "issues neglected by more conventional politicians: the ravages of drug addiction, the costs of immigration, the cultural and economic decline of the industrial working class." And, he admits, "there is no denying now the outdatedness of the dogmas that gripped the Republican Party over the past decade."

Donald Trump's presidency poses unprecedented problems for constitutional democracy because of his indifference to and apparent contempt for traditional institutional norms and restraints. Even so, as Frum acknowledges (with some legitimate procedural concerns) many of those institutional restraints remain in place. What may be undermining those restraints' ability to be effective in checking Trump is the unholy bargain by which a backward looking political party, its leadership still stuck in 1980s ideological fantasies, has enabled Trump's personal agenda in return for his enabling his party's political agenda.