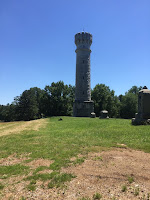 Earlier this week, I and some confreres visited the Chickamauga and Chattanooga National Military Park in Georgia, during a lull in our annual priests’ convocation in Chattanooga. Late in 1863, Union and Confederate forces fought for control of Chattanooga, known as the "Gateway to the Confederacy." The Confederates won the preliminary battle at Chickamauga, GA, in September. But November brought the Union victory at Chattanooga, a defeat one Confederate soldier famously (and correctly) called "the death-knell of the Confederacy." At Chickamauga, Union Commander, General William Rosecrans (1819-1898), had mistakenly opened a gap in the Union line which led to the loss of the battle and soon after to his being relieved of command by General U.S. Grant. In 1889, however, he spoke at the dedication of the Chickamauga and Chattanooga National Military Park. (General Rosecrans was also a Catholic. His brother Sylvester served as first Bishop of Columbus from 1868 to 1878 and his son Adrian was ordained a Paulist priest in 1872, but he died in 1876 and is buried at the Paulist Fathers' Mother Church in New York.)

I confess I am not a big battlefield aficionado. I have always been much more interested in the political history and diplomatic dimensions of wars than in the military strategy and tactics that won or lost individual battles. In fact, I think that the only other American battlefields I have ever actually spent much time at have been Gettysburg (which I visited with my parents more than 50 years ago) and Princeton (having been a graduate student there at the time of the bicentennial of that important Revolutionary War battle of January 3, 1777).

A Civil War battlefield like Chichamauga does focus one's attention on the terrible human toll taken by that horrible war, and a terrible toll it was indeed! As one Confederate sergeant in that battle lamented, "we are slaying each other with no better instincts than prehistoric brutes with improved machines to accomplish it." The inevitable parting question when one leaves such a place becomes "Was it worth it?"

Of course, it was worth it - well worth it -  to suppress the evil of secession, save the Union, and end the horror of slavery. But tragically so much of what was inherent in those eminently admirable war aims was then thrown away when Reconstruction was abandoned for almost another century. And still, more than 150 years later, our Union remains fragile, fractured along racial and regional lines rooted in that earlier conflict and perpetuated by our destructively divisive politics.