For the Life of the World 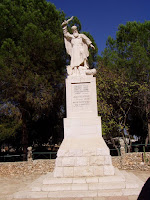 There are times in many people’s lives when nothing at all seems to go right, despite all our best efforts. We try our best, but it just isn’t good enough. Too much is being demanded of us; too much seems to be expected of us. We get worn out and want to give up – just like Elijah in today’s 1st reading [1 Kings 19:4-8].

Elijah was – and is - the most remembered prophet of the Old Testament. The familiar Transfiguration story suggests that Elijah in some sense personified the prophetic part of Israel's history (as Moses personified the Torah). Although not the author of any particular prophetic book, Elijah was a powerful prophetic personality at a critical time in Israel's history. He appeared on the scene, virtually without introduction, in the Northern Kingdom during the disastrous reign of King Ahab in the 9th century BC. His story is told in a series of incidents beginning in the first book of Kings. It is a story of faith versus the political corruption of religion by politics that remains radically relevant in every era - and especially our own.

The city of Haifa in Northern Israel, a major seaport and Israel’s 3rd largest city, originated as a settlement at the foot of Mount Carmel, a mountain famous for its association with Elijah. The Carmelite order traces its origin to hermits who lived on Mount Carmel and maintain a monastery there to this day. A large statue of Elijah [photo] marks the supposed site of his famous confrontation with the 450 prophets of the pagan god Baal, in which he had dramatically demonstrated the superiority of Israel’s God, resulting in the end of Israel’s 3-year long drought. But, after what should have been his moment of greatest triumph, Elijah had to flee from Ahab’s pagan Queen Jezebel, who was determined to kill him.  So he descended from the mountaintop of elation into the desert of despondency, which is where we encounter him at the beginning of today’s reading - on the run, exhausted in body, broken in spirit, and filled with an overwhelming feeling of failure: “This is enough, O Lord! Take my life, for I am no better than my fathers.”

Elijah's battle against the pagan Queen and her false god had put him in direct conflict with the King, who called him troubler of Israel [1 Kings 18:17] - comparable in today's terminology to calling him an "enemy of the people" or a spreader of "fake news.” Elijah's mission included incidents of great success but also experiences of seeming defeat and the discouragement that accompanies constant conflict with popular worldly power. So when Jesus himself at one point expressed his own frustration at having been rejected [Luke 4:24-27] he referred back to the example of Elijah.

Most of us don’t lead such significant public lives like Elijah’s, of course. So our own dramas of frustration and failure seldom seem so dramatic. Occasionally, the feelings of otherwise ordinary un-public people sometimes spill out in public - even erupting in violent acts such as we have so often witnessed in our country in recent years. At the other extreme, some try, with greater or lesser degree of success, to keep such feelings behind a defensive wall, in an attempt to insulate both themselves and society from their effects. In between these extremes, feelings of frustration and failure frequently spill out in bitterness, fury, anger, shouting, and reviling – malicious behaviors, which Saint Paul said grieve the Holy Spirit of God.

In contrast, Paul instructed the Ephesians to be kind to one another, compassionate, forgiving one another as God has forgiven you in Christ.

Of course, that’s a lot easier said than done!

So how does one get from here to there?

Ready to give up, Elijah fell asleep under a broom tree. But God would not let Elijah’s rejection and discouragement be the end of the story. Awakened by an angel, he found the nourishment he needed and which he would not normally have expected to find there in the desert. He should have recognized that as a sign that help was actually on the way. So depressed was he, however, that even after eating and drinking, he fell asleep again - only to be wakened and fed again.  Elijah was ready to give up even on God, but apparently God was not willing to give up on Elijah.

God really did demand a lot from Elijah. Hence God’s unwillingness to let him give up, but hence also his readiness to accompany Elijah on the way, personally providing him with what he would need.

None of us is Elijah, of course. Yet God does expect results from each one of us as well. And we too may feel at times as if too much is being expected of us. After all, who can really be expected to be kind, compassionate, and forgiving – especially when doing so seems to produce so few - if any – good results?

Yet what the great 4th-century Doctor of the Church Saint Gregory Nazianzen [329-390] said of the priesthood applies universally, certainly to anyone who presumes to speak as God’s prophet: We must begin by purifying ourselves before purifying others; we must be instructed to be able to instruct, become light to illuminate, draw close to God to bring him close to others, be sanctified to sanctify... [cf. CCC 1589].

Just as God was prepared to accompany Elijah and personally provide him with whatever he would need, he does the same for us on our own difficult, tedious journey.  As Saint Paul has reminded us, Christ loved us and handed himself over for us as a sacrificial offering to God. Paul’s reminder is always timely – but never more so than in those times and situations when we too feel discouraged and are tempted to give up.

As we have been hearing in the Sunday Gospel readings these late summer weeks, the Eucharist is the visible food Christ gives us for the journey – our life-long journey out of the desert of bitterness, fury, anger, shouting, and reviling to the mountain where, having experienced for ourselves God’s kindness, compassion, and forgiveness, we can at least begin to become people of kindness, compassion, and forgiveness for the life of the world.