The Synod on Young People 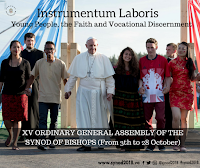 The 15th Ordinary General Assembly of the Synod of Bishops opened today and will continue through October 28. Its topic is Young People, the Faith, and Vocational Discernment. That certainly sounds better than referring to it (as one so easily tends to do) as "the Synod on Young People." It may seem increasingly normal in this era of "identity politics" to to speak of groups (like "young people"), as if their experience were totally unique and disconnected from the fuller life of the Church and the wider human community, but I think it is always at best a bit awkward to do so.

Yet, without adhering to a generational exceptionalism that treats today's young people as absolutely unique in human history, there is a certain novelty to their situation in relationship to the Church. More than young people in most previous generations, many of today's under-30s largely live in a world in which the Church is simply not a significant presence and from which her absence does not seem to be perceived as a problem. The Church's absence is, of course, a concern to those young people who care about such things - among them the 300 or so young people from all over the world who participated in a pre-synodal meeting in Rome last March, along with the many more who participated online. It is a concern, obviously, to those from older generations who worry about the Church's future prospects in increasingly secularized societies. The Bishops who are attending the Synod represent the whole Church, and it will be quite a challenge for them to represent young people in a way that will be recognizable by young people themselves.

The issue facing the Synod is not so much what is to be done but what is to be said? Synods are, after all, largely if not entirely talk. So many young people today face truly challenging prospects - personal and professional, private and public, environmental and economic, social and structural. However distinctive today's context, such challenges are not entirely unprecedented. The Church can offer young people an alternative of much needed communal solidarity with a long and strong tradition of moral and spiritual seriousness. So one would think the Church would have something to say - perhaps plenty to say. Yet so much of what the Church says - or is perceived to be saying - seems to too many people today to be at best somehow off-topic. As a result the "good news" that it is the Church's mission to speak seems to too many today to be either bad news or, as is increasingly the case, no news at all.

In  his homily this morning for the Opening Mass of the Synod, Pope Francis said:

we will try to listen to one another, in order to discern together what the Lord is asking of his Church. And this demands that we be really careful against succumbing to a self-preservation and self-centredness which gives importance to what is secondary yet makes secondary what is important. Love for the Gospel and for the people who have been entrusted to us, challenges us to broaden our horizons and not lose sight of the mission to which we are called. In this way we shall aim for an even greater good that will benefit all of us. Without this disposition, all of our efforts will be in vain.

So let us pray that the Risen Christ, who is head of the Body that is the Church, will empower the Synod Fathers to speak not just their own words, but the words which the Holy Spirit is challenging the Church to speak on the Lord's behalf (cf. Luke 12:12).