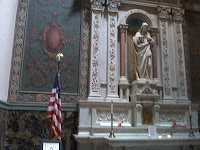 There are, I think, two quintessentially American holidays. Thanksgiving Day (in late autumn, after the harvest) looks inward to the heart and soul of America, and so is celebrated at home, at table, among family and friends. Independence Day (in summer) looks outward to the world of nations and states. It recalls when we, as a nation, in Thomas Jefferson’s words, assumed “among the powers of the earth, the separate and equal station to which the Laws of Nature and of Nature’s God entitle them” – and so is celebrated (as John Adams said it should be) “by pomp and parade, with shows, games, sports, guns, bells, bonfires and illuminations from one end of this continent to the other.”
As citizens of the United States, we proudly celebrate our national day as Adams predicted we would. We honor our heritage, the great legacy left for us, often at great sacrifice, by generations of citizens past - immigrants to this great land - with whom we remain linked in a great social compact, bonded by history to one another, both past and present, for the sake of the future; and so we celebrate today our past national history, our present life together, and our hope for our common future. At the same time, we assemble today, as we do every Sunday, to profess our faith. “And the homily, as former US Senator from Missouri and an ordained Episcopal priest, Senator John Danforth, once said, “is the place to connect the two.”
But how to connect the two? In one sense, I suppose, the linkage may seem obvious. It may no longer be the case, perhaps, as it was in 1782 when Benjamin Franklin wrote, “that persons may live to a great age in [this] country, without ever having their piety shocked by meeting with either an Atheist or an Infidel.” Yet there is still no other Western country in which religion – and the Christian religion in particular – is so strong and vibrant as in America. Something like 90% of Americans claim they believe in God, and some 60% say religion is very important in their lives.
And, despite the determined efforts of some elite elements to exclude religion from public life, religious people continue to consider their beliefs important and to resist reducing them to some socially harmless private hobby. As that great observer of American democracy, Alexis de Tocqueville, wrote in 1835, a person “will endeavor … to harmonize the state in which he lives upon earth, with the state which he believes to await him in heaven.”
We Catholics, of course, have a long history (going back to the Roman Empire) of thinking about how to relate our faith to civil society – a long tradition of practical wisdom concerning social and political life. Today’s Gospel, however, highlights not our ordinary obligations as citizens, but our special duty as disciples, commissioned by Christ to evangelize the world – starting with ourselves and with the society in which we live and which we are committed to.
Jesus’ action in sending the 72 disciples as a kind of practice-run for what they would later be doing after his ascension reminds us that evangelizing, as Pope Paul VI famously expressed it in 1075, “constitutes the essential mission of the Church” – in every age and in every society.
Jesus, we are also told, sent the 72 in pairs – not as isolated individuals, but in pairs. One of the great things about this country is the value it places on our private, individual lives. But, like all good things, that can be overdone. Today’s Gospel reminds us that we are not isolated, individual selves, but a community of faith, formed by the Holy Spirit into one Church, the body of the Risen Christ, to continue his mission in every town and place. Jesus commanded his disciples to make a difference in their world. So, if we really mean what we say we believe, then what we do in our many relationships and multiple commitments – in our families, at work or school, in our society, and indeed in the wider world – must make a difference and be recognizable as such. In the kingdom of God’s great struggle against every evil that stands in the way, Jesus expects us to be on the same side with him – on the side of the kingdom of God. Being on God’s side, having our names written in heaven, frees us to join Jesus in making a real, recognizable difference in an always challenging, sometimes welcoming, but also sadly sometimes inhospitable world. It frees us to tell – and retell – the story of Jesus, to speak his word to any and all, so we too can say to this world we live in and love, “The kingdom of God is at hand for you.”
Homily at St. Paul the Apostle Church, NYC, July 4, 2010.
Posted by City Father