A Trip to the Cemetery 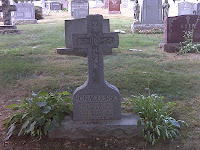 There is a scene in the 1971 film The Emigrants, when, just before leaving their impoverished existence in 19th-century Sweden for the greener pastures of Minnesota, the Larsons (played by Max von Sydow and Liv Ullmann) visit the graves of their deceased children. It’s a very poignant scene, because both they and the audience know they will never be back to visit again.
I thought about that scene today as I visited Gate of Heaven cemetery in Westchester, where my father and my sister are buried (as well as my maternal grandparents and an aunt and an uncle). Of course, my impending move is nothing like that of the 19th-century Larsons. Not only do I fully expect to visit New York again many times, but I will almost certainly see that specific cemetery again.
Back in the 50s and 60s, when we used to visit the cemetery several times a year as a family, I had only a grandfather and an uncle buried there. Then my grandmother joined them in 1967. Much later, my father was buried there in 1999, followed by my sister Christine, who died in 2007. I also have cousins buried elsewhere in the same cemetery, which is also the resting place various other friends and acquaintances, as well as any number of those whose burials or funerals I have been privileged to celebrate in the course of my ministry here in New York, first at Good Shepherd in the 1980s and then these past 10 years at St. Paul’s.
A cemetery certainly evokes a sense of place. It represents a very tangible connection, not just with particular people but with a particular place connected with those people. Wherever I may move, the cemetery where my father and my sister are buried will forever connect me with this particular place, this part of the world. Cemeteries are, obviously, about separation, the supreme separation between the living and the dead. But a cemetery's permanence as a physical place to which the living return to visit makes it also about connection, the connection between the living and the dead in the communion of saints, and also the connection one feels with the particular locale one shared with the dead while they were still alive.
Posted by City Father