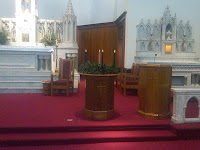 Tonight, I will be going over to the local University parish to help with Advent confessions. It will be the first of several such confession evenings in various parishes in the next couple of weeks. Definitely, the serious side of Advent.

This is a supremely festive, celebratory time of the year. But Advent is also intended to be taken seriously as a quasi-penitiential time. Indeed, this season of autumn turning into winter gives this holiday time a distinctive feel, a somewhat solemn and reflective mood, which the Church’s annual cycle tries to capture in its observance of Advent.
Advent originated as an annual period of repentance focused on preparation for Judgment Day. It has even been suggested that the liturgical hymn Dies Irae, that magnificent masterpiece which was for so many centuries sung at funeral Masses, may perhaps have been originally composed for use in Advent - its somber sentiments intended to concentrate our attention of Christ's final coming at the end of time as judge of all the world.
In any case, Advent continues the end-time, Judgment Day themes of the preceding several Sundays, summing them all up in the warning. Like the servants in the Gospels, we have been left with work to do, while we wait for the Lord’s return.
We will do that waiting - in what we might call “liturgical time” - by looking back, to get to the future. I sometimes think of Advent as an ecclesiastical version of the Macy’s Thanksgiving Day Parade, which ends with Santa Claus, thus formally introducing us to Christmas. Thus, the 4th Sunday of Advent will recall Jesus’ conception in his Virgin Mother’s body. The 2nd and 3rd Sundays, however, will recall the adult Christ’s public appearance on the historical stage as announced by John the Baptist, challenging us to recognize Jesus, here and now, in the present time, between Christmas and the end. Finally (but at Advent's beginning), the 1st Sunday puts past and present in perspective, focusing on Christ’s final coming, when (as we say in the Creed) he will come to judge the living and the dead.
Hence the somber tone. What we see and observe are autumn’s withered leaves, winter’s barren branches, and the end of another year. What we feel and fear is the end of ourselves. As the prophet Isaiah laments, we have all withered like leaves, and our guilt carries us away like the wind.
Yet, while Advent starts out being about fear, it is also about faith and hope – both the passing of an old year and our hopes for the new, both the ever enveloping winter darkness of a dying natural world and the dawning brightness of Christ’s coming to save us. As Saint Paul assures us, God is faithful, and by him you were called to fellowship with his Son, Jesus Christ our Lord.
In the true spirit of winter – winter as it used to be experienced when people actually lived according to the rhythm of the seasons – Advent challenges us to slow down and take stock, to pay attention. Of course, everything about the way we live nowadays militates against slowing down – let alone taking stock of ourselves and paying attention to anything. If anything, in our work-obsessed society we all brag about being so busy.

The older I get, the more I think I begin to appreciate how much sense Advent makes. The older one gets, the more aware one becomes that time is running out, and thus the more one appreciates the importance of the present.
Time – this time, our time – is so precious, precisely because it is limited, but also because it has a future. Advent annually ritualizes for us our ongoing present reality, where we actually are right now, living and waiting between Christ’s 1st coming at Christmas and his final coming for which we say – as we pray every day at Mass – we wait in joyful hope.
Advent is not, therefore, some irrelevant interlude on the way to Christmas. Much less is it some artificial exercise in make-believe, created by ecclesiastical kill-joys to compete (as if one could complete) with the joyful Christmas season being celebrated all around us. In any case, the liturgy isn’t a play. We’re not reenacting God’s entry into our world a long time ago, or pretending Jesus hasn’t already been born, so that we will be somehow surprised on Christmas morning - as if Jesus were Santa Claus.
The point of Advent is to let the anniversary of Christ’s 1st coming concentrate our attention on his coming again, while we, meanwhile, recognize his action on our behalf in the present. The challenge of Advent is to let our anxious and fear–filled present be transformed into that hopeful future promised by Christ’s coming in the past.
Advent is a wake-up call to respond to Christ’s coming and so live as people for whom the Christmas story really matters enough, to make everything different from what would otherwise be in a world without the presence of its Savior, Jesus Christ, Emmanuel, "God with us."
Posted by City Father