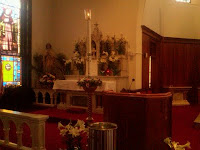 Today’s annually repeated gospel [John 20:19-31] captures the novelty and uniqueness of the resurrection in its account of the disciples’ encounter (actually 2 encounters) with the glorified body of the Risen Christ. Jesus’ actual resurrection, which we celebrated with appropriate splendor last Sunday, was a real event (every bit as real as his crucifixion), but one which (unlike the crucifixion) no one witnessed first-hand. What was witnessed initially was an empty tomb – a necessary condition for the resurrection to be true, but insufficient evidence in itself. Something more had to happen, and something more did happen – a series of encounters in which the Risen Lord demonstrated to his disciples that he was the same Jesus who had lived and died (hence the wounds in his hands and side), now alive again in a unexpectedly new and wonderful way (hence his presence among them, although the doors were locked.)
Understandably fearful for their safety, the disciples had hidden behind locked doors. Perhaps this was the same “upper room” where they had so recently eaten the Last Supper and where they would gather again after the ascension to await the coming of the Holy Spirit. If so, how appropriate! Since apostolic times (long before it ever became a day off from work), Sunday, the first day of the week, has been the special day, the irreplaceably privileged day, when Christians assemble in their churches to encounter Christ, the Risen Lord, present through the power of his Holy Spirit in the sacramental celebration of the Lord’s Supper, the Eucharist.
On that first day of the week, Jesus came and stood in their midst and said, “Peace be with you.” Surely, that was no mere wish on his part! Christ, the Risen Lord brings peace –not some social or political peace, but the peace that conquers fear. It is clear enough from the locked doors just how fearful the disciples must have been.
Many of us do in fact spend much of our lives behind locked doors – a sensible practice perhaps, but one obviously rooted in fear. There are also the many locked doors one doesn’t see, but feels nonetheless. We may not be so afraid of the authorities as the disciples were, but our fears are no less real, wounding us in all sorts of ways, wounds we carry within us, concealing them as best we can.
Yet, when Jesus came to his disciples that first day of the week, far from concealing his wounds, he showed them his hands and his side – and the disciples rejoiced. As the absent Thomas acutely appreciated, Jesus’ wounded hands and side reveal the continuity between the Jesus who really and truly died on the cross and the now-living Risen Christ, who commissions his Church to heal the world’s wounds and impart his forgiveness in the sacraments of his Church: “Whose sins you forgive are forgiven them.”
For the resurrection was not just some nice thing that happened to Jesus - and then leaves everything else in the world completely unchanged. It was – and is – the foundation of what the first letter of Peter, from which we just heard [1 Peter 1:3-9], calls an imperishable, undefiled, and unfading future inheritance to which, through the resurrection of Jesus Christ from the dead, we already have access here and now in the present.
It is fitting, therefore, that this 2nd Sunday of Easter is now known as “Divine Mercy Sunday.” Through the many wonders and signs done through the apostles, as recounted in today’s 1st reading [Acts 2:42-47], and experienced ever since in the unique sacramental community that is the Church, the Risen Lord has revealed his Heavenly Father as a God of mercy and himself as “Divine Mercy Personified.” The resurrection is, indeed, as the now newly beatified Blessed Pope John Paul II said, just a decade ago, “a miracle of mercy,” which “has radically transformed humanity’s destiny.”
Like Thomas, we were not there on that first day of the week, but we are here today - on this first day of this week. The celebration of Sunday is, as the Catechism says, “at the heart of the Church’s life,” “the foundation and confirmation of all Christian practice,” “a testimony of belonging and of being faithful to Christ and to his Church” – the Church, which professes its faith in the Risen Lord and his new creation, and “so bears, nourishes, and sustains” our faith. The 1st day of the week, the day on which God began the work of creation, has become our day of re-creation, the beginning not just of another week but of a whole new way of life, pointing us forward to the fullness of that new creation in which, living for ever with the Risen Christ, we will finally become most fully human.