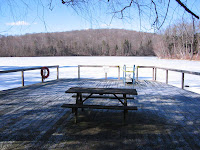 Thirty years ago today, I entered the Paulist Novitiate at Mount Paul, Oak Ridge, NJ. The property has occasionally been affectionately described as “1100 acres of rocks and trees.” True enough, but that leaves out the lake – in which those so inclined could swim and on which they could ice-skate, depending on the season. There were also several hiking trails, for those so inclined. And, of course, in the center of it all and the reason for it all (at least as far as we were concerned) was the Novitiate building itself – a typically tasteless, architecturally non-descript edifice erected c. 1960. It had functional bedrooms (equipped with sinks – a luxury we would lack the following four years in Washington), long linoleum corridors, a good institutional kitchen, a serviceable dining room, a decent downstairs common room, and, as its ostensible centerpiece, a modestly attractive chapel.
That was where 8 of us – ranging in age from 21 to 33 – had elected to spend a year in vocational discernment. Whatever God’s long-term providential plan for each of us vocationally, his short-term providence provided us with a wonderful (albeit challenging at times) experience of God, Church, and one another.
At present, I am the only one of my class still serving as an active Paulist priest. I have only occasional contact with some of my novitiate classmates and none at all with the rest. So my reminiscences remain entirely my own, neither augmented nor balanced nor corrected by those of others in my class. In one sense that is especially sad, because, whatever else it was, the novitiate year was pre-eminently and experience of community – in particular, our community with one another. It was, of course, intended to be a year of individual spiritual growth and discernment and an introduction to the Paulist community. And it was all those things. I did a lot of reading and “journaling,” tried to pray a lot, and met many, many Paulists whose past stories and present lives introduced me (more than any theoretical presentations did or could) to the Paulist Fathers as a living corporate reality – the minuses as well as the pluses.
Most of all, however, it was an intense experience of small community life, learning to live with others whom I had not chosen to live with (or even to know). Our wise novice master often characterized the novitiate experience as an atypical year designed to preclude our escaping from God, ourselves, and one another. Whatever happened with God and oneself, it most certainly was difficult to escape from one another. In that, it functioned as the beginning of a multi-year process of what is now officially called “human formation.” I don’t recall our novice master ever using that term, but he often spoke of its substance, and it clearly was his priority.
There were hot summer days at Mount Paul, to be sure, but what most of my novitiate generation remember is the cold. It was a damp cold. I remember some days getting into bed around 4:00 p.m. and running the electric blanket for about 10 minutes or so, to warm myself up sufficiently for the rest of the day. I remember attending Mass in the freezing cold chapel, wearing my winter coat. But, since I like winter and generally prefer the cold to the heat, my memories of all that are much fonder than those of some.
All in all, in was a good year – in a good place. I still mourn the fact that the novitiate is no longer located there and that today’s novices have nothing like the unique experience we had. And I likewise mourn the necessary but nonetheless tragic decision to sell the property to the state of New Jersey over a year ago.
But then we have not here a lasting city, but we seek one that is to come (Hebrews 13:14).