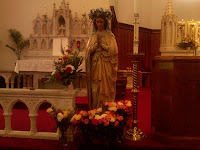 On August 15, 1844, just two weeks after his reception into the Catholic Church, Isaac Hecker wrote in his Diary: “To day is the holy day of the Assumption of the dear Blessed Mary mother of our Lord and Saviour Jesus. Oh may I be found worthy of her regard and love.”
Because August 15 falls on a Monday in 2011, the solemnity of the Assumption of the Blessed Virgin Mary will not be a holyday of obligation in the United States this year. Even so, the Assumption remains one of Our Lady’s oldest feasts and is also one of the greatest in the Church calendar (along with the solemnities of Mary’s Motherhood on January 1 and her Immaculate Conception on December 8).
The bodily Assumption of the Blessed Virgin Mary is an ancient belief of the Church, although its formal dogmatic definition finally occurred only during the Holy Year of 1950. Already, at the 1st Vatican Council (1869-1870), some 200 prelates participating in the Council had requested such a definition. In 1946, Pope Pius XII, responding to even more such petitions, asked the Bishops of the world whether in their opinion it was time that the bodily Assumption of the Blessed Virgin Mary into heaven should be defined and proclaimed as a dogma of faith. Finally, on November 1, 1950, in the Apostolic Constitution Munificentissimus Deus, Pope Pius XII declared: "By the authority of our Lord Jesus Christ, of the Blessed Apostles Peter and Paul, and by our own authority, we pronounce, declare, and define it to be a divinely revealed dogma: that the Immaculate Mother of God, the ever Virgin Mary, having completed the course of her earthly life, was assumed body and soul into heavenly glory" The dogmatic definition of the Assumption emphasizes that this special privilege granted to the Blessed Virgin Mary is relevant for the hope of all of us, as it highlights “to what a lofty goal our bodies and souls are destined.” Thus the Pope expressed his “hope that belief in Mary's bodily Assumption into heaven will make our belief in our own resurrection stronger and render it more effective."
In other words, where she is now, there we hope to be. And as she is now (in her whole humanity) is how we also hope to be.
Monday or not, it most assuredly deserves to be a holyday!
Posted by City Father