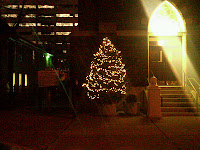 Knoxville had its annual Christmas Parade on Gay Street tonight. Meanwhile up the hill Immaculate Conception Church hosted a concert of "Down Home Christmas Music with a Twist," featuring hammered dulcimer and penny whistle. Outside the church, our parish Christmas Tree made its informal 2012 debut. (It will go dark again until its official Blessing and Lighting on our parish's patronal feast next week).
There is something special about Christmas Trees - the way they light up the dark winter night outdoors, the way the evergreen smell permeates the indoors. When the Christmas Tree makes its appearance is always cheers people up. I remember back in 1975 setting up a second-hand artificial tree in the living room of the apartment I and two other graduate students were then sub-letting overlooking Lake Carnegie in Princeton. As I strung the lights and hung the ornaments, one of my housemates came home. When he walked into the living room and saw the tree, his eyes lit up, and he commented how nice it was. As I said, it was a used, second-hand, artificial tree - nothing to write home about. But, with just a few lights and some ornaments, it was transformed into an icon of Christmas joy.
Whether it's the monumental Christmas Tree that stands in Rockefeller Center or the small, modest "tree" that graces the lonely apartment of some solitary unfriended soul, somehow a Christmas Tree - just by being a Christmas Tree - speaks so eloquently the story of this season, the intense desire of the human heart for hope and salvation.
Posted by City Father