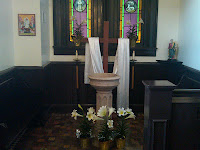 Why, someone wanted to know, now already several days after Easter, do I keep saying on this day? The questioner was referring, of course to the Easter Preface recited every day this week at Mass, that begins: It is truly right and just, our duty and our salvation, at all time to acclaim you, O Lord, but on this day above all to laud you yet more gloriously, when Christ our Passover has been sacrificed. The on this day reference is reinforced even further, later in the Eucharistic Prayer, by the specially inserted phrase: Celebrating the most sacred day of the Resurrection of our Lord Jesus Christ in the flesh…

It was an easy question to answer. I mentioned the ancient Christian custom of the newly baptized attending Mass still dressed in their white baptismal robes for an entire week until the Sunday after Easter, and how the whole week was seen as a continuation of their Easter experience – a explanation that, while it may have effectively reduced the octave liturgy to a vestigial historical curiosity (perhaps like the Roman station Masses for these days), at least minimally seemed to answer the question. Of course, if I had been asked the same question a few months back, i.e., during Christmas week, I couldn’t have given quite such a simple answer. Perhaps, then, I might have delved deeper into liturgical history and explained how the Dedications of Churches were once celebrated for 8 days in imitation of the Jerusalem Temple’s 8-day Dedication Feast and how that then spread to other major festivals – with the result that by the mid-20th-century there were some 20 or more octaves of greater or lesser solemnity in the Roman Calendar (radically reduced to 3 in 1955 and then to only 2 in 1969). Perhaps it is just as well that the question didn’t come up back then!

But then the obvious dissonance between the ubiquity of octaves for much of liturgical history and the post-modern problem of appreciating the essentially mystagogical character of an octave got me thinking. It also reminded me of a seminary classmate who once agued that the Easter season was simply too long (at 7 weeks) to be sustained by contemporary people and advocated its reduction to one week at most. He did have a point (sort of), as indeed did the questioner perplexed by octaves! Indeed, does the radical reduction of octaves in the recent reforms reflect a realistic accommodation of sorts to this cultural change?

Why is it that ancient and medieval people could celebrate a festival for 8 days (or even more)? What have we done to time and to the way we live time that has rendered such extended celebrations incompatible with contemporary life?

We seem to do better at anticipation. The commercial motive may explain some of that – the long Christmas season that begins earlier and earlier all the time but promptly ends on December 25, and the similar, if less pervasive, commercial build-up for Valentine’s Day, Mother’s Day, etc. Commerce aside, however, even in Church we do better at anticipation. Admittedly Advent doesn’t work so well in our society – so overwhelmed is it by the anticipation of Christmas. Lent, however, works very well, and is probably the most actively and widely observed season of the liturgical year – perhaps the only season to be in fact observed as such, since even in Churches there seems to be a somewhat precipitous drop-off in activity in the immediate aftermath of both Christmas and Easter. I love Lent, and I think it is wonderful how parish life intensifies during that time, and I recognize that one cannot remain always at such a high level of intensity. Still, the question deserves to be asked: Why is the level of interest Lent generates so largely unsustainable during Easter Time?