At the Lord's Supper 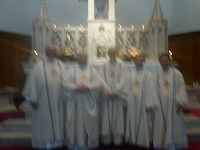 This day we popularly call Holy Thursday uniquely straddles the border between Lent and Easter. Already in the 4th century, Pope St. Sylvester I is supposed to have said: “On this day the sacrifice of the sacred Body and Blood of the Lord was initiated as a celebration by the Lord himself. On this day the holy chrism is consecrated throughout the world; on this day too pardon is granted to penitents, those at enmity are reconciled, those who are aggrieved are pacified.”
These three themes have historically characterized this day – with different emphases at different times. In the ancient Roman titular churches, the reconciliation of those doing public penance took place at an end-of-Lent morning Mass, while the institution of the Lord’s Supper was recalled at another Mass in the late afternoon. In between, the priests from all the titular churches assembled for a single mid-day Mass at the Lateran Basilica at which the Pope consecrated the sacred chrism and blessed the other holy oils.

The elaborate ancient ritual for the Reconciliation of Public Penitents continued to be printed in the liturgical books up until the 1960s, even though it hadn’t been used in that form for over 1000 years. The blessing of the oils has continued uninterrupted to this very day, although the special Mass for that was only revived in the 1950s, at the same time that the Mass of the Lord’s Supper was moved to its present evening hour.

Yet, while all these ceremonies have evolved and been changed over time, those three basic elements so long connected with this day remain still very much at the heart of our Easter experience – this year and every year – and they all come together in the Eucharist we celebrate at this altar. For tonight, we don’t just remember the Last Supper of Jesus with his disciples, as some interesting thing that happened in a faraway place a long time ago. Rather we remember and celebrate the how Jesus’ special Last Supper continues now in his Church as the Lord’s Supper.
St. Paul’s letters are among the oldest New Testament writings, and so his 1st letter to the Corinthians, from which we just heard, was the earliest written account of Jesus’ Last Supper with his disciples on the day before the Passover holiday. It’s safe to suggest that none of those disciples, as they sat down to supper, suspected that by the time Passover began, some 24 hours later, Jesus would be dead, and buried in a stranger’s tomb, and that they would all be in hiding. Certainly, none of them yet realized how this otherwise ordinary meal would be dramatically transformed by Jesus’ own words and actions into the Church’s central sacrament - as, offering his body and blood to his Father, Jesus would give them to his Apostles to eat and drink, and then direct them and their successors in the priesthood to offer them in turn.

The New Testament tells us how, from the very beginning, Christian communities devoted themselves to the breaking of bread and prayers [Acts 2:42]. As the Church grew in size and expanded in influence, the Church’s worship, centered on the regular celebration of the Lord’s Supper as Christ’s priestly sacrifice of reconciliation, would in time transform first the Roman empire and then the ever wider world – as it must still continue to transform each and every one of us, caught up in the priestly embrace of Christ’s reconciling sacrifice.
For Christ himself is the Anointed One to whom those blessed oils point us. He is - in the words of a famous 6th-century African Bishop [St. Fulgentius of Ruspe] - “the priest through whom we have been reconciled, the sacrifice by which we have been reconciled, the temple in which we have been reconciled, the God with whom we have been reconciled. He alone is priest, sacrifice, and temple because he is all these things as God in the form of a servant.”
So it is only fitting that we begin the first day of our Easter celebration, the day on which we commemorate Christ’s passion and death, in this supremely priestly act of reconciliation, this Eucharistic sacrifice which sums up in itself what Christ’s death and resurrection are about and everything the Church is about.
By giving his body to be eaten and his blood to be drunk, Jesus expressed the deepest truth about what he would do on the Cross. The Eucharist we celebrate tonight – and all year long - makes really present that very same body once offered on the Cross, then buried in the tomb, and now risen from the dead and seated at the right hand of the Father. The mystery of the Eucharist, which proclaims the death and resurrection of the Lord until he comes again, is at the very heart of the Church’s life. It is, as we say, the sacrament that makes the Church.
In the vestibule of our church is a photograph taken last Fall at the celebration of our parish church’s 125th anniversary. When I look at that picture, side-by-side with the earlier one which was taken 125 years previously, I think of all the wonderful church activity that has gone on in this beautiful building and all the wonderful church life that, like the crowd in that picture, has spilled out from this building, beginning at this altar.
Our life together as Christ’s Body, the Church, centered on the sacraments we celebrate here is a great inheritance – an inheritance which goes all the way back to that famous Last Supper, which we have received from the apostles, passed on to us through countless generations of people like us. Whether amid the splendor of a papal basilica or in the simplicity of a missionary outpost, whether with the Bishop in his cathedral or with friends and neighbors in a local parish church, this same Lord’s Supper has been celebrated generation after generation and treasured by every generation as its precious inheritance. As Pope Benedict has recently reminded us, however, during his visit last year to San Marino, “the best way to appreciate an inheritance is to cultivate and enrich it.”
As we do that, then who we are becoming here around this altar will overflow from this building and fill our world, as that congregation last autumn spilled out of this church and filled up that photo.