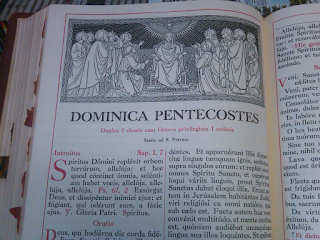 50 Days have passed since we gathered here to celebrate the Lord’s resurrection. And, during the course of the Easter season, there has been a certain shift in emphasis from what Jesus himself does to what his disciples will do – more precisely to what the risen and ascended Christ continues to do in the Church through the Holy Spirit who has been given to his disciples so that they can continue his work in the world.
It takes time, of course, to prepare people properly to undertake something so major. In a sense, that is what the risen Jesus was doing during those six weeks which followed his resurrection and ended with his ascension 40 days later. Jesus was laying out his program and preparing his disciples to implement it. And now the implementation process is set to begin. Jesus’ program, of course, is the mission of the Church. For the Church is what Pentecost is about – the Church which has been entrusted by the risen and ascended Lord  to continue his life and mission on earth by bringing the good news to all.
What we call Pentecost is actually a very ancient festival. The Greek word “Pentecost” refers to the 50th day - originally the 50th day after Passover. Its Hebrew name, Shavuot, means “weeks,” referring to the seven weeks that began with Passover. Shavuot was the second of the three great pilgrimage feasts in the Jewish calendar – along with the spring feast of Pesach (Passover) and the autumn harvest festival of Sukkot (which the New Testament typically calls “the Feast of the Tabernacles”). Originally a joyful thanksgiving feast for the early spring’s harvest, over time it became a commemoration of the covenant, of the giving of the Torah at Mount Sinai, which occurred (according to the account in Exodus) at about seven weeks after Israel’s escape from Egypt. Just as summer fulfills the promise of spring, the giving of the commandments fulfilled the promise of nationhood, of which the exodus had been but the beginning. So too, Pentecost’s gift of the Holy Spirit fulfilled the promise of the resurrection, transforming the disciples into faith-filled witnesses testifying to the whole world.
The second thing the Holy Spirit did at Pentecost was to break down barriers, beginning with the basic barrier of language. When the apostles spoke, each one heard them speaking in his own language [cf. Acts 2:1-11]. To those who knew their Bible, the meaning was clear. The Holy Spirit was undoing the evil of multiple languages in the world, the damaging diversity of languages that had come about as a result of human beings’ sinful attempt to construct a tower to get them to heaven on their own [cf. Genesis 11:1-9]. Through the presence and power of the Holy Spirit, however, the Church undoes the disunity of the human race, reuniting it in something new, the kingdom of God. The point of the Pentecost story is not society’s diversity, which is just a human fact, but the Church’s unity and universality, which are among the accomplishments of the Holy Spirit.
Both before and after the Tower of Babel, of course, the damage done by human sinfulness has taken many destructive forms. Thanks, however, to the presence and power of the Holy Spirit in the Church, the damage can be undone – in the lives of those guided by the Spirit, who live in the Spirit, and who follow the Spirit [cf. Galatians 5:16-25]. In a world, which still seems to resemble the Tower of Babel more than the Kingdom of God, the presence and power of the Holy Spirit are also evident in what we call the fruits of the Holy Spirit – in love, joy, peace, patience, kindness, generosity, faithfulness, gentleness, and self-control.
Liturgically, Pentecost marks the transition from Easter to ordinary Time – from spring to summer. It’s our annual observance of what happens every week with the transition for Sunday to Monday. From this, our common celebration every Sunday around the altar of the unleavened bread of Easter, where we are made one body through the power of the Holy Spirit, from this the Holy spirit’s energy calls us forth to a new concern for the entire human family and all that affects it. From here on Sunday, the gift of the Holy Spirit challenges us on Monday to bring the presence and power of the Risen Christ out into the ordinary, leavened bread which is our (no-longer) ordinary life in the world.
Homily for Pentecost Vigil Mass, Immaculate conception Church, Knoxville, TN, May 26, 2012
Posted by City Father