Between the Ascension and the End 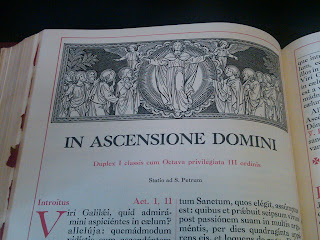 It’s always wonderful to be back here at St. Paul’s - especially on a day like today, since it means I get to celebrate the Ascension on its actual traditional day, festively observed as only New Yorkers know how to do by suspending alternate-side-of-the street parking! It’s even better, of course, in some European countries where it is still a legal holiday. In some of them the Stock Markets are closed in observance of the Ascension, which - in Europe right now - might be a persuasive argument for even more such holidays!

As the words of the Creed suggest, the ascension actually involves several things. Historically speaking, it has to do with the fact that the Risen Christ was no longer living among his disciples as he had been before. The Risen Lord lives already the new life of the future of which his resurrection is a kind of foretaste for us. According to the New Testament accounts, the Risen Jesus appeared a number of times to his disciples. But then, after a certain limited period, those appearances ended. It was time to move on to the next stage in history – our time, the time of the Church.  Historically, therefore, the Ascension refers to the end of that period of the Risen Christ’s appearances to his disciples and the beginning of the time of the Church.

That being the case, one might ask: well, where exactly is he? Again, the Creed contains the answer: he is seated at the right hand of the Father. Of course, as Son of God, the Divine Word, has always been with the Father. Theologically speaking, what the Ascension celebrates is that God-with-us, the Word-made-flesh, the incarnate Christ is now with God his Father, the fact that his human body (and thus our shared human nature) that is with God.

In Jerusalem, in the Church of the Ascension on the Mount of Olives, pilgrims get to see a footprint-like depression in the rock, which purports to be the exact spot from which the Risen Lord ascended to heaven – a bit fanciful, perhaps, “as if” (as one author has written) Jesus “sprang into the heavens with such vigour that the very rock underneath his feet was compressed in the act” [Douglas Farrow, Ascension Theology, 2011]. The footprint may well be fanciful, but it does highlight the fact that it was Jesus’ human body (and thus our shared human nature) that ascended – that is, is now with God.

As St. Augustine famously said in one of his sermons: “Although he descended without a body, he ascended with a body and with us, who are destined to ascend, not by reason of our own virtue but on account of our oneness with him” (Sermon 263).

Thus, the Ascension anticipates what the resurrection has made it possible for us all to hope for. In the words of today's liturgy: he ascended, not to distance himself from our lowly state, but that we might be confident of following where he has gone before.

Meanwhile now - in this interim between the Ascension and the end - the Church continues his life and work on earth. They went forth everywhere, while the Lord worked with them and confirmed the word with accompanying signs [Mark 16:20].