The Return of the Fanon 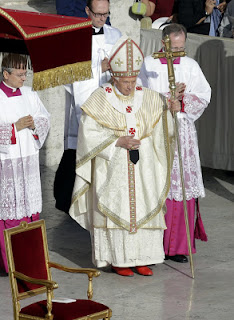 Now I’ll be the first to admit that this is something that interests only a very miniscule segment of the world’s population. And, compared to the impending Storm of the Decade or even our national election, I'll readily also admit  that it really ranks way down on the scale of ultimate importance. Still, I am happy to number myself among those who rejoice in Pope Benedict XVI’s recent restoration of the Fanon at Solemn Papal Mass at St. Peter’s. (The Pope wore it for the first time a week ago at the Mass for the canonization of seven new saints).


The use of the Fanon dates back at least to the 8th century and was used continuously at solemn Papal Masses until the dismantling of the papal liturgy several decades ago. The Fanon is essentially a kind of circular shoulder-cape (kind of like a mozetta) worn by the pope alone, consisting of two pieces of white silk ornamented with narrow woven stripes of red and gold.

There are, to my mind, two good reasons to celebrate this restoration of the Fanon. The first is, simply put, tradition. All ritualized behavior - social, political, religious - incorporates aspects that are of limited or no present practical purpose, but which are retained simply because they signify continuity with the past. To be clear, there was certainly much that was good and beneficial in the late-20th-century liturgical reforms, but a certain rationalistic tendency crept in along with the good and beneficial – a rationalistic tendency that evidenced little appreciation of what ritual really is.  In the end, of course, a totally rationalized liturgical ritual is inconceivable. Just as we still light candles on the altar, even though electric lighting is available, traditional actions (and vestments) from the past remain an important component of liturgy.
Of course, some inherited traditions do get changed over time and for good reasons. For example, the offensive omission of the Flectamus genua in the Good Friday Prayer for the Jews was rightly corrected by Pope Pius XII in 1955. But, when change is not really needed, then it is generally better not to change. That is because continuity itself has a social value – and nowhere more so than in the liturgy, in which we are being united with all the People of God, not only of every place, but of every time. Vestments, as the papal MC, Monsignor Guido Marini, is supposed to have said some years ago, “aim to underline the continuity of today's liturgical celebration with that which characterized the life of the church in the past."
So retaining (in this case restoring) the use of traditional attire highlights the continuity of the Roman Rite and symbolizes the Church’s present connection with the Church of ages past.
The second reason why I think the restoration of the Fanon is a good move is that it highlights the distinctiveness of papal liturgy. Another oddity of the late-20th-century liturgical reforms was the tendency to assimilate papal ceremonial to ordinary pontifical ceremonial. Of course, the Pope is first and foremost a Bishop. So papal ceremonial should rightly be recognizable as indeed a case of pontifical ceremonial – but still a special case. A Papal Mass is not just a Pontifical Mass in a larger than usual venue with a larger than usual crowd and extra security! Pilgrims who attend a Papal Mass attend precisely because it is special (which is why they are willing to put up with all the security and other inconveniences which nowadays accompany such ceremonies).

In this age of increasinlgy casual attire, we may perhaps be in danger of forgetting that how one dresses for an occasion says something significant about the importance of the occasion and about one's own understanding of one's role. It seems especially significant that the Fanon reappeared at a canonization - one of the most solemn and authoritative   papal acts. Distinctive papal vestments are one small, but observable addition which highlights the specialness of the papal office.
Posted by City Father