The Gospel of the Family 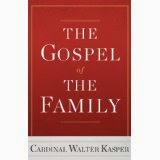 In preparation for this fall’s forthcoming extraordinary Synod of Bishops on the pressing topic of Pastoral Challenges to the Family in the Context of Evangelization, Pope Francis invited Walter Cardinal Kasper (who from 2001 to 2010 was the President of the Pontifical Council for Promoting Christian Unity) to give a presentation to last month’s extraordinary Consistory of Cardinals. Perhaps not surprisingly, most of the commentary has concentrated on the particular part of Cardinal Kasper's presentation which addressed the high-profile contemporary question of how the Church responds (and might in the future respond) to those who have divorced and then remarried. Obviously, appropriate pastoral care for the divorced and remarried is a particularly pressing challenge for the Church and one which requires a lot of attention from all of us. That said, however, the Cardinal had a lot more to say on the Church's overall ministry to families, all of which also merits attention.
In his talk, entitled The Gospel of the Family, Cardinal Kasper began by recalling how “In all cultures in human history, the family is the normal path of human beings” and that “Without family, there is no future, but rather a senescence of society – a danger before which Western societies stand.” Indeed, marriage and family are, according to Kasper “the last pocket of resistance against a coldly calculating and all-consuming economization and mechanization of life.”

True enough, but I think this just highlights the contemporary dilemma that we expect and demand so much more from marriage and family life today, even while the social supports for marriage and family life have - since at least the Industrial Revolution - become progressively weaker. This is a systemic social problem which conditions the context in which the Church lives and the situations to which she responds
In his talk, Kasper recalled the biblical understanding of and commandments concerning family life – specifying that they are not “a burden upon or restriction of freedom” but rather “signposts on the path to a happy and fulfilled life.” And in the face of the often alienating realities of human life, the family is called to serve – as is the Church itself, recalling Pope Francis’ memorable phrase – as “a field hospital, where it is necessary to bind many wounds, dry many tears, and establish reconciliation and peace time and again.”

In response to today’s challenges, Kasper invoked the New Testament concept - recalled by Vatican II and developed in greater detail since, notably in Pope Paul VI’s 1975 apostolic exhortation on evangelization – the concept of the family as “the domestic church.” Among those challenges facing the family today, Kasper cited “modern working and living conditions,” which “have led to a separation of residence, work place, and locations for recreational activities, thereby contributing to the collapse of the house as a social unit.” To remedy this, he suggests building new houses in “a new kind of extended family. So that nuclear families can survive, they must be embedded in a system of family ties that extends over generations, where especially grandmothers and grandfathers play an important role; they must be embedded in interfamilial circles of friends and neighborhood, in which children find shelter when their parents are absent and in which single older people, divorced individuals, and single parents feel somewhat at home.”

Here in the United States, it seems to me that we have been experiencing a progressive deterioration of such "circles of friends and neighborhoods." That, along with the widely noted negative impact of poverty and increasing economic inequality on many people's prospects for successful marriage and family formation, are serious systemic challenges to contemporary marriage and family life. Like other traditional social structures and institutions, churches likewise find themselves significantly impacted in their ability to serve in such a role and fulfill such expectations. At the same time, being a new community that both supports and transcends family ties remains, I think, central to the Church's life and must continue to inform its social relations and functions.

To me this is one of his key points. The reality remains that for most people their lives continue to be lived largely in families and remain centered on their families - while, for those who for whatever reason do not get the opportunity to form families or whose families have broken apart, that situation itself becomes central to their daily reality. The pastoral care of a parish community and that community's evangelizing outreach beyond itself inevitably take place for the most part in this critical context in which family life and its successes and failures largely define people's life experience and hence both their expectations of and much of their response to the Church's message.