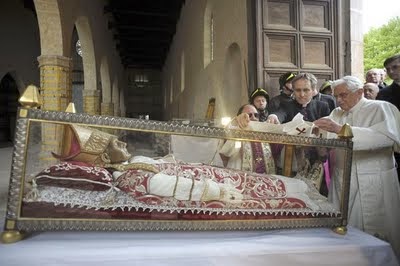 In the old calendar, today was the feast of Saint Peter Celestine (c. 1215-1296). Pietro da Morrone was a Benedictine solitary, who founded a branch of the Benedictines subsequently known as the Celestines. In 1294, the College of Cardinals ended a prolonged vacancy of the Holy See by electing the pious hermit pope by "inspiration." He became Pope Celestine V. As the pre-1969 Roman Breviary told the story, "he was elected to the Chair of Peter without his knowledge and in his absence. The news of his election filled everyone with as great amazement,a s it did with sudden joy. But when he had been elevated to the papacy, distracted with various troubles, he saw that it was almost impossible to attend to his accustomed meditations, and resigned the burden, as well as the honor, of his own free will."

His surprising reign and even more surprising resignation in December 1294 - after only 5 months on the papal throne - were followed by the election of the infamous Boniface VIII, who soon had the ex-pope arrested and imprisoned at Fumone in Campagna. He died in there on May 19, 1296. Canonized in 1313, he is still venerated in his native Abruzzi region, where he is buried at L'Aquila, the site damaged by a severe earthquake in 2009. It was while visiting that site afterwards that Pope Benedict XVI placed his original papal pallium on Pope Saint Celestine's tomb (photo). In 2013, Pope Benedict became the first pope since Celestine V to resign the papal office. Thankfully, he has been able to enjoy a more peaceful and dignified retirement than Celestine was afforded!

In his Inferno (III, 59-60), Dante placed one, "who by his cowardice made the great refusal." This unnamed figure has been widely (although not unanimously) thought to be Pope Celestine, whose abdication Dante blamed for making possible the reign of Boniface VIII, whose assertion of papal political supremacy Dante disputed in his De Monarchia. Boniface himself was still alive when Dante wrote his Divina Comedia, but Dante put him in hell anyway.

Pope Celestine's story served for a long time as a negative precedent against the desirability of future papal resignations. Pope Benedict and his successor, Pope Francis, have now created a new, much more positive precedent, which may historically serve the Church better than the sad story of Celestine and Boniface.