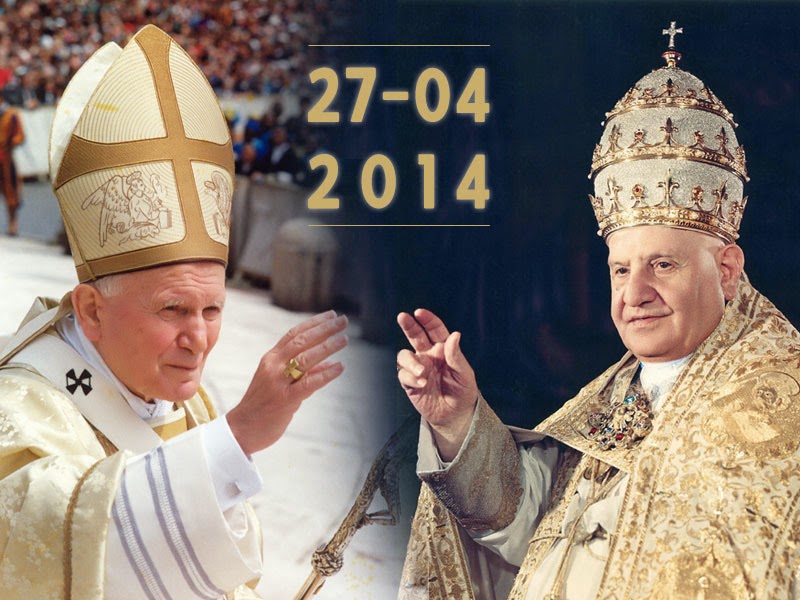 The calendar may have turned another page to a new month today, but much of the media remains still stuck in what a distinguished student of saint-making Kenneth Woodward calls a "misleading metaphor." (See "The Making of a Misleading Metaphor: No 'big Tent' in Recognizing Popes as Saints" http://www.firstthings.com/web-exclusives/2014/04/the-making-of-a-misleading-metaphor). Woodward is the author of Making Saints: How the Catholic Church Determines Who Becomes a Saint, Who Doesn't, and Why (1990).
On the whole I agree with Woodward's "misleading metaphor" analysis, although I wonder whether he too may inadvertently risk succumbing to that "misleading metaphor" when he refers to Pope Saint John Paul II's joint beatification of Pope Pius IX and Pope John XXIII in 2000 as "an extremely odd coupling of a liberal and a reactionary pope." Aside from the stereotyping of past popes in contemporary political categories, what is also ignored is the fact that Pope Saint John XXIII himself had hoped to be able to beatify Pope Pius IX at the close of the Second Vatican Council.

That said, Woodward's more important point, which I think cannot be repeated too often, is that the focus on the Church as being divided between conservatives and liberals "is largely the fixation of Catholic partisans in North America and parts of Western Europe, where only a minority of the world's Catholics now live." As the first Pope from Latin America, Pope Francis represents, reflects, and articulates the concerns of a much larger Catholic population. I see that reflected, for example, in the Holy Father's stated concerns about increasing economic inequality - not just his famous recent tweet, but his more formal statements in Evangelii Gaudium and elsewhere.

The joint canonization was certainly an important moment in the life of the contemporary Church, and it is, I think, legitimate to read it as a somewhat official interpretation of the charisms and contributions on Saints John XXIII and John Paul II - an interpretation which rightly recognizes both pope-saints as being basically on the same page on earth even as they are now in the same place in heaven.

Meanwhile, I look forward to celebrating the new saints' feast days when they come around in October. Until then, enough said on the subject!
Posted by City Father