The Iraq Debate in the Shadow of Vietnam 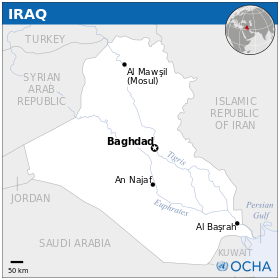 There are actually several debates going on about Iraq right now, in addition to the most obviously immediate one about what, if anything, the United States should be doing right now in terms of direct intervention. That invites a deeper debate about what is actually going on in Iraq, and what exactly the long-term interests of the United States in regard to this sectarian conflict are. That, of course, brings us full-circle back to the debate of a decade ago about the merits of the American intervention that toppled Saddam Hussein's regime and set the stage for what has happened since. That debate has been exacerbated by the recent public posturing of some associated with the 2003 decision to go to war and their sometimes strong criticisms of present policy-makers now saddled with an array of bad options - one worse than the other - as a result of that earlier decision.

CNN's series, The Sixties couldn't have come at a better time, since it reprises - rather fairly - the way we trapped ourselves in a losing war in Vietnam. For those of my generation especially, just hearing the President use that infamous term "advisers" today is more than enough to call up a host of unhappy memories from that terrible time!

However unwise and ideologically constricted the process that got us into Vietnam, it is fair to say that American motives were for the most part honorable, at least the way most Americans understood "honorable" back in the Kennedy years. Those were, it should always be recalled, among the most intensely conflicted of the entire Cold War. It was eminently rational to interpret what was happening in Vietnam not as just another regional nationalist conflict but as yet another front in the world-wide conflict we called the Cold War. Whether that was a correct interpretation is another question. In any case, since we lost the war in the end, it proved to be a mistaken interpretation in terms of serving our long-term national interest. The Cold War was serious business. (The Soviet blockade of Berlin began 66 years ago today!) But because a policy was understood in Cold War terms and based on Cold War motivations did not guarantee its wisdom or ultimate success and did not prevent it from damaging rather than advancing the long-term interests of the United States. The same obviously applies to today's War on Terror.

But the point remains that, while Vietnam in the end damaged rather than advanced the long-term interests of the United States, it was a mistake many made intelligently and honorably. That was one reason it took so long for us as a society to conclude that the war was really a mistake - by which time we were disastrously over-invested in the conflict from which we then found it so tragically difficult to extricate ourselves.

So I am more than willing to concede intelligent error and honorable miscalculation to our 21st-century policy-makers - at the time much of the political class in both parties - who initially supported the Irag war. Endless recriminations about the process leading up to the decision to go to war and trying to establish one's moral high-ground based on how soon one changed one's mind just adds further fuel to the endless fire of political polarization - much as the endless Vietnam debate has for decades fanned the flames of an incorrigible culture war.

That said, it is important to admit the damage the war in Iraq has done - damage to Iraq itself, to the stability of the region, to America's Great Power credibility and international standing, and to our necessary role in establishing and maintaining a stable and balanced international order. In other words, whatever the original goals of the Iraq war and however honorable anyone's intentions may have been, it has turned out - like Vietnam - to be an unmitigated disaster. Recognizing that must become the first premise of any further discussion

To me it also appears increasingly clear that the post-World War I arrangement of regional middle eastern state borders is no longer sustainable. In a sense, what is happening there is a middle eastern version of what happened in Europe during and after World War II, when the the post-World War I re-drawing of Europe's borders was superseded by a drastic and murderous re-arrangement of populations. The victorious Allies' own role in the post-war ethnic cleansing (if one may use that ugly phrase) of eastern Europe, resulting in much more ethnically homogeneous successor states should also not be forgotten or minimized. Personally, I do not know whether the partition of Iraq into three states (or pseudo-states) is inevitable, or whether it would be more just and equitable than trying to keep the current artificial country going. How does anyone know? The fact is that the demons that were unleashed with the Iraq war a decade ago are now probably well beyond our capacity to control and even beyond our capacity to interpret with a sufficient probability of accuracy.