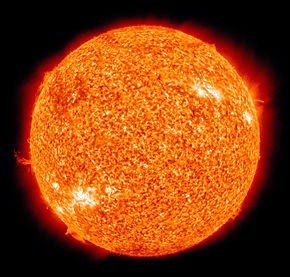 Summer - admittedly my least favorite season in terms of temperature - officially begins today (although the past week's oppressive heat might suggest that it has already been with us for some time). Of course, however "natural" the seasons might seem, the computation of the seasons is a human artifact and hence in that sense "artificial." When I was growing up, we spoke of summer as beginning when school let out (around the last week of June) and ending with labor Day and the opening of a new school year the following week. The growing tendency to see our summertime civic holidays as seasonal markers has led to making Memorial Day (now no longer a day but a weekend) into the quasi-official beginning of the summer vacation season, with Labor Day weekend at the end, and July 4 as a kind of "midsummer" holiday.

A more traditional "midsummer" celebration is, of course, June 24 - the Nativity of John the Baptist in the Church's calendar but a traditional, pre-Christian summer solstice celebration long before Christianity. Unlike our scientific way of computing the seasons as starting with a solstice or equinox, the ancient European Celtic calendar centered the seasons around those astronomical events and so formally began the seasons at the beginning of February, May, August, and November. (Hence, the traditional Candlemas/Groundhog Day, May Day, Lamas Day, and Halloween/all Saints Day as cardinal turning points of the calendar). Obviously, if one thinks of summer as extending from May Day to Lamas Day, then the solstice certainly would be "midsummer," a time laden with traditions deriving from a time when seasonal rhythms really mattered and significantly governed people's lives. (One of the last remnants of that in the official Christian calendar was, of course, the four seasonal Ember Days, deleted sadly from the calendar  in 1969.)

In more traditional agricultural societies, summer was serious work-time (the real origin of our summer school vacation). Winter was the season when nature seemed to shut down and society imitated it in taking a bit of a break. As our work lives have largely shifted from agricultural to urban and from outdoors to indoors, summer has since become the vacation season par excellence (although it is increasingly a feature of affluence also to take other vacations as well - e.g., "winter break" and "spring break"). Still, summer certainly was that prime vacation time when I was growing up as it still is for many people. (At one time that also reflected the extreme discomfort involved in indoor work in summer's heat, a problem now alleviated by air-conditioning, which makes year-round work possible regardless of climate.)

In our workaholic culture, even our downtime is now expected to be productive in some way. So often people's vacations seem so active, so busy, that one wonders whether they might need a few days to rest up afterwards before going back to ordinary work! Of course, summer can be a good opportunity to be busy doing different things. Among my most memorable and enjoyable summers were those I spent studying in Austria (1970), in Mexico (1988), in Israel (1993), and in the UK (2005). Still there is something to be said for the old-fashioned idea of slowing down and relaxing in summer. My grad school summers in the mid-1970s were like that. We went to the library virtually every day and studied, but at a much more relaxed pace, which gave us time to enjoy each other. And a happy time it was!

In human terms, the "don't worry" theme of today's gospel reading (Matthew 6: 24-34) is a wholesome reminder of the need to recover greater balance in our lives. The stuff we obsessively keep checking for on our smartphones need not be dismissed as totally unimportant. It just needs to be re-ordered within a more humane structure of better balanced priorities. My regrets and complaints about the heat notwithstanding, summer may still serve us well in this regard.