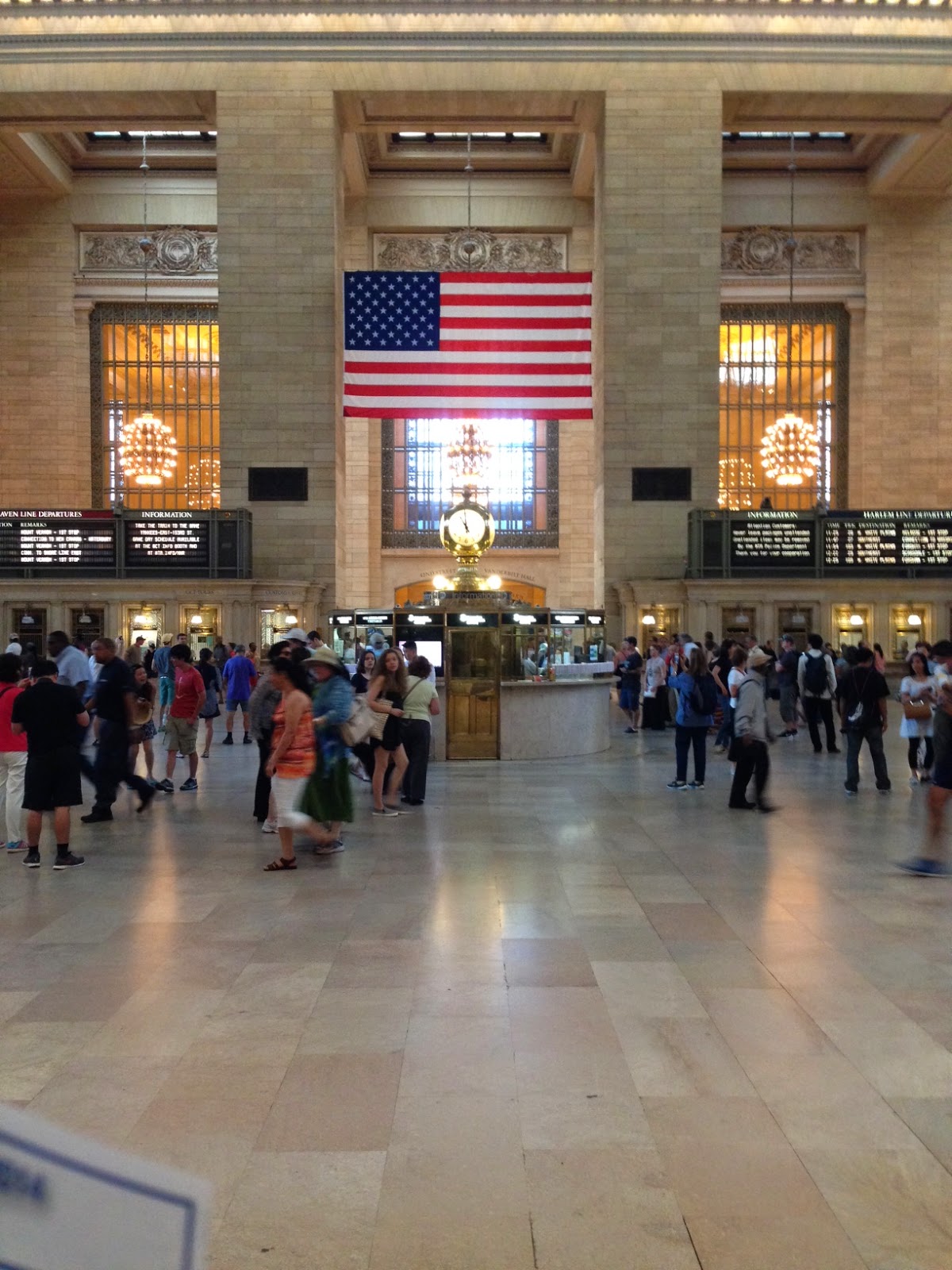 For anyone unfamiliar with the sad saga of the original Penn Station - as well as for everyone who is - his article is well worth reading. Reno recalls the architectural beauty and grandeur of the once monumental station and its wanton destruction in the 1960s, when such cultural vandalism was what passed for being on the right ride of history among our social and cultural elites. Only after the station had been demolished did the full realization of what had been done and what had been lost begin to sink in among the citizenry of the city - fortunately in time to save Grand Central Station from a similar tragic fate. Reno approvingly quotes the architectural critic Vincent Scully's famous line that through the old Penn Station, "one entered the city like a god," while now instead "one scuttles in now like a rat." 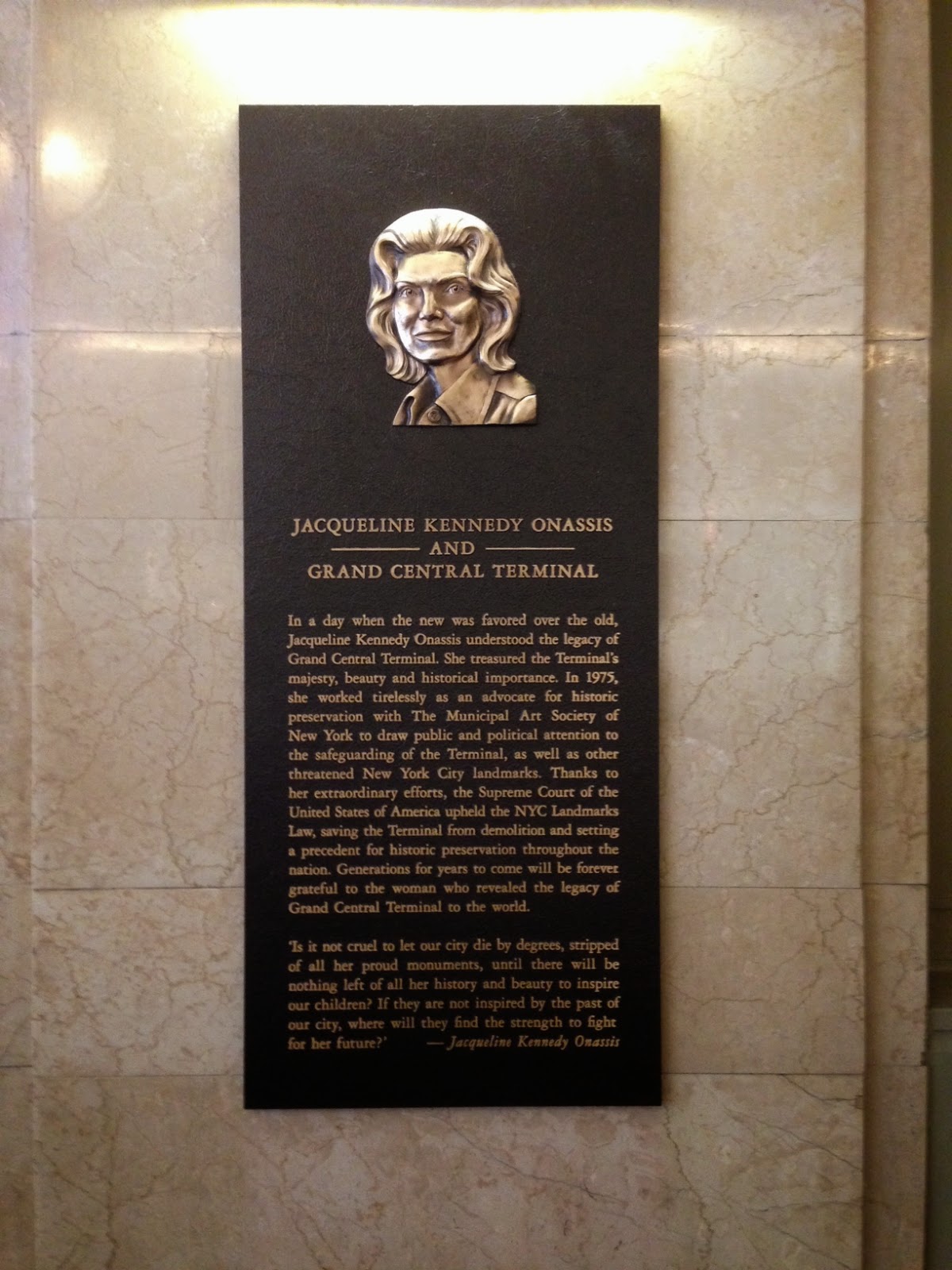 I read all this early this morning before heading off to Grand Central (1st photo) to catch a Metro-North train to Westchester to meet some of my cousins for lunch. The convenient coincidence that brought me today to that beautiful station - saved largely through the heroic efforts of Jacqueline Kennedy Onassis, whose pivotal contribution to saving the station is now fittingly acknowledged with a wall plaque (2nd photo) - got me thinking more about Reno's proposal. (While the historic Penn Station was demolished when I was in my early teens and so was never a major experience in my life, Grand Central in all its salvaged and restored glory has long been an important transit point for me.)

On its face, Reno's suggestion seems almost absurd. Our society has rendered itself incapable of building or undertaking anything of consequence - due in large measure to the destructive anti-tax, anti-government mentality embraced and fostered by so many of Reno's magazine's would-be political allies  on the right. That mentality is both anti-community and anti-future. Hence our national inability to repair and rebuild our decaying infrastructure, not to mention our collapsing educational system, and our dysfunctional non-response to the impact of global climate change. It's been a long time since the U.S. put a man on the moon - a long time since we as a society have been able to articulate any comparably ambitious common goal!

That said, Reno makes a cogent case for the feasibility of rebuilding Penn Station. He reminds us how European cities reconstructed so many of their historical buildings that had been bombed during World War II or deliberately destroyed by the Communists. He does not mention it, but I have personally long been fascinated by and rooting for the proposal to rebuild the Hohenzollern Imperial Palace (or at least its facade) in Berlin - a site doubly scarred, first by wartime bombing and then by Communist construction.

Reno is quite clear that what he is talking about is a retrieval of what was lost - not some new modern station. He warns that "our cultural leaders don't want a beautiful classical building. They want something 'new and exciting,' which invariably means a building that looks like an airline terminal." Such has been the fate of so much of our public space in the last half century, which, as Reno observes, reflects "the style of our global corporate culture" rather than an "American civic culture."

In this regard, I think also of all the ugly modern churches that have been built in the past half-century or so! Like civic buildings, churches represent archetypical public places, and an important public function of a church is to be beautiful - something modern elites unduly concerned with being on the right side of history have again so sadly ignored.

In this era of increasing inequality and the faux populist rhetoric it is inspiring, Reno concludes with this powerful, very much to the point observation: "The really rich in New York don't have to put up with the current Penn Station. They have limos and drivers and private jets. But the rest of us must share our public spaces."