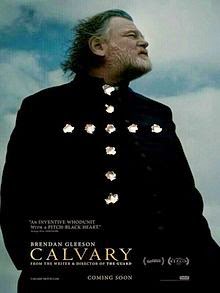 The excellent Irish film Calvary stars Brendan Gleeson (who played "Mad Eye" Alastor Moody in the Harry Potter movies) as Father James, a conscientious priest in a rural, Irish, seaside village. The film begins in the confessional where Father James is with death. The threat comes from someone he's fairly sure he knows, a parishioner who wants to strike out against the Church by  killing someone he considers a good priest. "I'm going to kill you because you've done nothing wrong,." his assailant tells him. The film then follows Father James in his black cassock as he struggles to carry out his parochial ministry day-by-day through his final week - from the confessional to his "calvary."

In the course of that week, we learn that he had been married and widowed before becoming a priest and has an unhappy adult daughter living in London, who comes to visit him. We also infer that he had once had a drinking problem. On top of all those personal tensions and his apparent loneliness (alleviated somewhat by his dog), he now has to struggle with the extreme tension frought on by the threat and the proximity of death.

Meanwhile, neither his curate nor his bishop appear particularly helpful. That might not matter so much if his ministry were not so frustrating. But, apart from the foreign widow of an accident victim he anoints in the hospital, virtually everyone he interacts with in the village displays some degree of indifference or contempt toward the Church. For the most part, they are not very nice people, and even his daughter at one point sympathizes with what he has to put up with from them. (Of course, she is ignorant of his internal suffering as his weekend rendezvous with his killer comes ever closer.) The bleakness of his situation is effectively evident in the beautiful but hauntingly bleak landscape of that particular corner of Ireland, but even more so in the daily frustration of his indifferent and hostile flock. The various vignettes of his interactions capture quite well the dilemma of being a public person of the Church in a world from which the Church (and the faith it professes) seem to be in rapid retreat.

Things come to a head one evening when his church burns down (the fire having presumably been set by his killer). The indifference of his flock to the destruction of their church seems a not very subtle expression of their indifference to the Church and the faith they are in the process of abandoning. Then someone slits his dog's throat. He starts to lose it, gets drunk, shoots up the local pub, and then starts to leave town. But an encounter at the airport with the foreign widow and the sight of her husband's coffin call him back home to face his killer. In a final phone conversation with his daughter, he focuses on forgiveness..

In the final scene, his daughter visits his killer in prison. We don't hear what is said, but presumably this is meant to suggest forgiveness. It is the one glimmer of hope in an otherwise beleaguered, post Chrstian landscape.
.
Posted by City Father