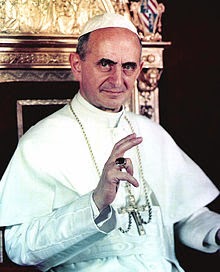 In his homily at the Mass of Beatification, which also served as the Mass for the conclusion of the Extraordinary Synod on the Family, Pope Francis made reference to today's Gospel and then quoted first from Paul's 1963 Coronation homily and then from his 1964 encyclical Ecclesiam Suam. Francis described Paul VI as one who truly "rendered to God what is God's" by devoting his whole life to the "sacred, solemn and grave task of continuing in history and extending on earth the mission of Christ," loving the Church and leading her so that she might be "a loving mother of the whole human family and at the same time the minister of its salvation."

Unlike any of the popes who succeeded him, Paul VI seemed to have been prepared for the papacy by the various stages of his career path. Whatever went on inside, outside the conclave Cardinal Montini was by far the odds-on favorite. I remember listening to the announcement on the radio that Friday morning, June 21, 1963, and thinking how different that conclave was from the previous one in 1958. This time the winner was predicted by almost everyone, and almost everyone was right!

For all his preparation, however, Paul's pontificate was far from smooth. First, he had the Council to guide and conclude. But then the implementation of the Council proved problematic on so many levels, and he was torn in so many directions - as was the Church in that exciting but difficult time that was the late 60s and the ensuing 70s. Paul allowed the liturgical reform to go way, way farther than the Constitution on the Liturgy had ever envisioned, with incomparable consequences we are still sorting out today. The story that he himself wept when faced with the consequences of certain of the liturgical changes he had authorized may or may not be accurate, but it does ring true, reflecting how conflicted he seemed to be about so many of the controversial actions he took. Politically too, his greater openness to Communist governments in Eastern Europe may have conceded too much and has been criticized accordingly - especially in light of his successor Saint John Paul II's different (and ultimately successful) approach of not conceding the permanence of Communism. On the other side, Paul's most 1968 encyclical Humanae Vitae was not really received by certain significant constituencies in the Church, with divisive and polarizing consequences that likewise continue to haunt the Church today.

All that having been said, he was also - as I wrote yesterday - the Pope of Evangelii Nuntiandi, the great 1975 Apostolic Exhortation on Evangelization in the Modern World. It has taken time, to be sure, but the Church's turn to evangelization as its core identity and essential mission was probably the most positive internal Church development in the aftermath of the Council, and it owes so much to Paul's personal evangelizing zeal and commitment.

Nor can anyone ignore Paul's personal and courageous commitment to building bridges of real understanding and relationship with the world beyond the Church - and in a special way with non-Catholic Christians and non-Christian religions. His history-making trips outside of Italy - starting with his pilgrimage to Israel in 1964 and his amazing address to the UN in 1965 - represented a new style of engagement with the world beyond the Tiber, which we now take for granted, but which was not so long ago unexpected and novel.

Pau's combined emphases on bridge-building and evangelization were how he fulfilled the mandate he identified for the Church in his first encyclical, quoted again today by Pope Francis - "a loving mother of the whole human family and at the same time the minister of its salvation."

Pray for us, Blessed Paul VI,
That we may be made worthy of the promises of Christ!