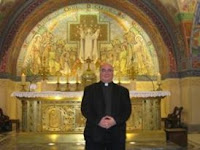 October begins today with the commemoration of Saint Thérèse of Lisieux (“The Little Flower”). And, later this month, her parents Blessed Louis and Zelie Martin will be canonized by Pope Francis, during the 14th Ordinary Synod of Bishops, which starts Sunday in Rome to discuss “The Vocation and Mission of the Family in the Church and in the Contemporary World.” Louis and Zelie will not be the first husband and wife who are both saints, but they will be the first from the modern era. They are commemorated together on July 12.

After an earlier career as a soldier, Louis Martin (1823-1894) a watchmaker, settled in Alencon, France, where on July 13, 1858, he married Zelie Guerin (1831-1877), who ran a successful lace-making business in town. Together, they had nine children – seven girls and two boys. Both boys and two of the girls died in infancy. Through their difficulties, they persevered strong in their Catholic faith and in their deep love for each other and for their five surviving daughters – Marie, Pauline, Leonie, Céline, and Thérèse. Eventually, four of their daughters - Marie, Pauline, Céline, and Thérèse - all became Carmelite nuns at the local Carmel, while Léonie became a Visitandine nun at Caen.

Canonized in 1925 by Pope Pius XI, who called her “the greatest saint of modern times,” Thérèse of the Child Jesus and of the Holy Face (to use her full religious name) was proclaimed Universal Patron of the Missions by the same Pope in 1927 and a Doctor of the Church by Pope Saint John Paul II in 1997. Devotion to “The Little Flower” and to her spirituality of “the little way” have been widespread in the Church for much of this past century. Her beautiful Basilica in Lisieux is now second only to Lourdes as a place of pilgrimage in France. I had the great privilege of visiting the Basilica of Saint Thérèse in Lisieux in 2009 and while there also had the opportunity of venerating the relics of her parents (photo). Famous for their saintly daughter, Louis and Zelie’s inspiring family story eventually propelled forward their cause for canonization as well. They were declared Venerable by Pope Saint John Paul II in 2004 and Blessed by Pope Benedict XVI in 2008. A Call to a Deeper Love: The Family Correspondence of the Parents of Saint Thérèse of the Child Jesus, 1863-1885 was published in English in 2011.

Louis and Zelie with their five daughters in religious life represent a special sort of family vocation and family sanctity. As we celebrate them and as the Synod on the Family assembles in Rome, we are invited to reflect upon and celebrate the multitude of models of holy, happy, and healthy families which the lived history and experience of the Church offers to us.

But, of course, we also know of the struggles of so many families - among them, divorced families, single-parent families, and families challenged by lack of social, and cultural opportunity in this era of increasing economic inequality. May the needs of all such families be before us and before the entire Church in a special way during this forthcoming Synod!