It Was Twenty Years Ago Today ... 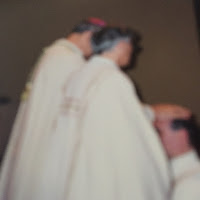 It Was Twenty Years Ago Today ... So begins Paul McCartney's Sgt. Pepper's Lonely Hearts Club Band, the title song of the 1967 album of the same name. Here, however, I am writing rather than singing about it; but 20 years ago today at Saint Peter's Parish (then the Paulist Fathers' Canadian parish in Toronto, Ontario) I was finally ordained a priest by Jesuit Bishop Attila Mikloshazy (then the Bishop for the Pastoral Care of Hungarian Emigrants).

Recently I found some 20-year old photos of that happy day, and today I posted them on Facebook - photos of the ordination ceremony itself, of my parents and Toronto parishioners at the reception afterwards, of Paulists who attended, and one of my first Mass the next day in the Paulist Fathers' House Chapel.

An ordination anniversary is an occasion for many emotions, for grateful remembrance of all those people who were there, some of whom have since returned to the Lord, and for prayerful reflection on the awesome ministry entrusted to me on that day by the grace of God, the hands of an Archbishop, and the decision of the Paulist Fathers. So, as always on this day, I begin by recalling the words preached by the great Saint Augustine of Hippo on his own anniversary of the day when he became a bishop, a responsibility, he noted, "for which it will be no easy task to render an account."

"When I remember," Augustine continued, "by whose blood I have been redeemed, this thought brings me peace, as though I were entering the safety of a harbor; and I am consoled, as I carry out the arduous duties of my own particular office, by the blessings of which we all have in common. ... To be a good shepherd I depend entirely on his grace, for without his help I should be a very bad one, there is so much evil in me. Pray, then, that I may not be a bad shepherd, but a good one. ... Make my ministry a fruitful one. You are God's garden, and you should therefore welcome the laborer who does the visible work of planting and watering the seed, even though the growth comes from one who works invisibly within you. Help me both by your prayers and by your obedience, for then it will be a pleasure for me, not to preside over your, but to serve you." [Sermon 340].