A City on a Hill 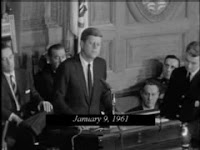 A city set on a mountain cannot be hidden [Matthew 5:14]. How often have we heard that applied to our own American experience – usually in the more traditional translation as a city set upon a hill? Not that long ago even presidents talked that way. Ronald Reagan famously quoted it in 1984 and 1989. Prior to that John F. Kennedy quoted it in 1961 (photo), explicitly referencing the first recorded use of it in relation to America – Governor John Winthrop’s famous sermon, A Model of Christian Charity, delivered in 1630 to the Massachusetts colonists while still on board their ship.

Whatever that expression has since come to mean in modern American politics, for Winthrop its meaning was quite clear – and challenging. He said:

We must entertain each other in brotherly affection. We must be willing to abridge ourselves of our superfluities, for the supply of others’ necessities. We must uphold a familiar commerce together in all meekness, patience, gentleness, and liberality. We must delight in each other, make others’ conditions our own; rejoice together, mourn together, labor and suffer together, always having before our eyes our commission and community in the work, as members of the same body. So shall we keep the unity of the spirit in the bond of peace [cf. Ephesians 4:3]. … For we must consider that we shall be as a city upon a hill. They eyes of all people are upon us.

Thanks to Winthrop and his fellow New England Puritans, Jesus’ famous challenge to his disciples to be the light of the world and a city set upon a mountain that cannot be hidden became a familiar and powerful American image, which over time has attracted immigrants from all over the world. Originally, of course, it referred to the Church, called by Christ to continue his life and mission by being light for an otherwise dangerously dark world.

To apply that image to society simply acknowledges the relevance of Jesus’ challenging words in our ordinary lives. It loses its power, however, when we treat it as if it were automatic – like touching a switch.

But, in the dark of night a city set upon a mountain might easily be hidden by the surrounding darkness, unless its streets and buildings are illuminated by the lights lit by its citizens’ communal efforts, none of which is automatic.

Making a fire, lighting a lamp, illuminating a city – in the non-electric world of the Gospel none of that happens automatically. It takes conscious commitment and effort, and without that effort there is only darkness. The illumination Jesus challenges us to bring about requires our commitment to the kingdom of God, the coming of which we pray for every day in the Lord’s Prayer – a state of affairs in which God is in charge, a word transformed by the saving power of Christ, where the forces of evil are in retreat, divisions are undone, and (as Winthrop said) we delight in each other, without fear of the dark.

Jesus’ life, death, and resurrection have revealed that God really is in charge – despite all appearances to the contrary, despite the obvious and persistent presence and power of evil in our world. Jesus challenges us to side with the light and reject the dark. But that is not so easy as it sounds.

For darkness still very much dominates the world. Yet, in spite of all that is so terribly wrong in our world, Jesus invites us to follow him into his kingdom, with confidence in his light’s power. So, while people still die, the resurrection of Christ assures us that death no longer has the final word. And, although people both in private life and public life still hate, exploit, and abuse, yet God’s kingdom of justice, reconciliation, and peace has already begun to take root in our world – through our life together.

In the dark, it seems only natural to hate, exploit, and abuse those who appear different from us in some way, and to be attracted to those who succeed in the world by doing such things, those the world admires and the powerful praise as “winners.” It takes the fire of love to light the lamp of reconciliation and to illuminate a city with God’s justice and peace. On our own, we would long ago have been left in the dark; but Jesus himself has provided us with the fire to light up his city, freeing us to share that light with one another.

Of course, even a city set on a mountain has to draw its water from the ground below. We are not on some private planet all by ourselves, but very much a part of this this time, this place, this society. Hence, Governor Winthrop’s detailed instructions to his fellow settlers on what being an authentic human community must entail – instructions every bit as timely today as they were then.

There is a darker approach to life in the world, one which seems increasingly to set society’s tone today, an approach which sees everything in life in terms of competition – society, politics, culture, economics, everything becomes a kind of zero-sum game of winners and losers. But, just as the light of any one individual candle will continue to burn with its full brightness, no matter how many more may be lit from it from it, we need not worry that the light will be lost if we share with others. Jesus does not want us to huddle, frightened and fretful, around a weakly lit fire, but to be a bright, well-lit city set on a mountain that not only can but wants to be seen for miles around – a new kind of community that already in the here and now has begun to live the new life of God’s kingdom, a city that not only cannot be hidden but that can, quite literally, light up the world.