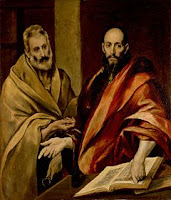 “A pity – I miss all the Vigils. Why on earth were they suddenly suppressed?” So wrote Thomas Merton on December 7, 1959. As is evident from the date, it was the Vigil of the Immaculate Conception, whose suppression by the mid-1950s liturgical wrecking ball he was lamenting. A decade later, under Paul VI the wrecking ball had completed its work, and Merton's lament could be applied to all the hitherto surviving vigils - including those of Christmas and Pentecost and today's ancient vigil of Saints Peter and Paul, which for so many centuries prepared the Church for tomorrow's celebration of the Church's two great founding apostles.

Pius Parsch claimed that the Mass for today's now discarded vigil (which survives, sort of, as an option for this evening) was actually older than that of the feast day itself. In some ways it may be even more fitting for the feast, since the Gospel (John 21:15-19), which recounts Peter's commissioning by the Risen Lord as Chief Shepherd of his Church, includes (as if it were inseparable) Jesus's prediction of Peter's martyrdom. It is, after all, Peter's martyrdom under Nero (along the the contemporaneous martyrdom of Paul) that is the ostensible occasion for today's feast - a martyrdom which sealed and validated the founding apostles' witness, a witness which continues today in a world superficially so very different from that of Nero but still seemingly resistant to the Risen Lord's invitation.

Amen, amen, I say to you, when you were younger,
you used to dress yourself and go where you wanted;
but when you grow old, you will stretch out your hands,
and someone else will dress you
and lead you where you do not want to go."
He said this signifying by what kind of death he would glorify God.
And when he had said this, he said to him, "Follow me."