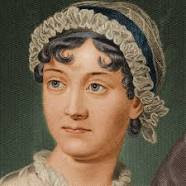 Today is the bicentennial of the death (at 41) of Jane Austen, Regency England's most famous novelist. In her memory, this year I resolved to reread Pride and Prejudice. Actually, much as it shames me to admit it, this was in fact really my first reading of it. Of course, I know the story and have seen more than one film version of it. But, back when I was actually required to read the book in junior year of high school, I did not do so - for ridiculous reasons embarrassing enough not to go into any further. I have always looked upon this as one of the more regrettable lacunae in my education, and this finally seemed the right time to rectify it.

This is not the first time in my life I have read a book after seeing a movie or TV version of it. (Usually, in fact, it is the latter that kindles interest in the former.) When one does that, of course, inevitably one's reading is amplified by visual images from the film or TV version. Having seen more than one version and each more than once, that was certainly especially true with my reading of Pride and Prejudice. I could anticipate scenes and vividly picture them in my mind as I made my way through Austen's masterpiece. It was an experience that says a lot about the dominance of visual media in the way we experience real literature today.

As for the novel itself, which Winston Churchill is supposed to have re-read during World War II, I have little to add to the virtually universal chorus of praise that has enveloped it these past two centuries. (Even Japan has a Jane Austen Society!) That its popularity has survived such dramatic social change, which has made the novel's world almost unrecognizably alien, in a way that it was not yet quite so alien when I first ought to have read it as recently as 50+ years ago, is another tribute to Austen's art.

A Vicar's's daughter (something she shares with Britain's present Prime Minister, Theresa May), Jane Austen was, I believe, at first published anonymously. But then her work was applauded by no less a person that the Prince Regent himself. Her work has continued to be applauded ever since - and if anything even more so - in recent decades.

The basic building block in a novel like Pride and Prejudice is, of course, the archetypal human story: boy meets girl, boy and girl get together in spite of any number of real and imagined obstacles, all set in the context of a social marriage market, accepted as critical for the fortunes of the individuals involved and taken for granted as foundational for society's successful functioning and continuance. In Pride and Prejudice, after turning down the unappealing but obviously sensible choice for a woman in her position, Mr. Collins, the heroine gets to marry (and for love) the much more desirable Mr. Darcy, and becomes therefore the mistress of Pemberley, with all that accompanies Pemberley in terms of wealth and social position.

In retelling the archetypal human story, Austen creates characters completely recognizable in their human dilemmas, even as she flawlessly evokes a faraway world whose intricacies of class and social status she seems to have been perfectly skilled at portraying. Sir Walter Scott said she presented her readers "a correct and striking representation of that which is daily taking place around" them. That too is part of her appeal – especially so today, when we look back with wonder and amazement at such a seemingly well-ordered world (so unlike ours in its orderliness and sense of place), while at the same time we recognize the underlying emotional stress that could chaotically co-exist with all that apparent orderliness and which she identified so well - and so perhaps helps us better to identify in our own less well-ordered world.
Posted by City Father