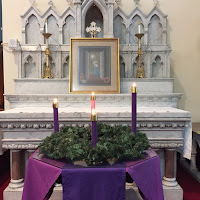 Tomorrow is the First Sunday of Advent. The distinctive liturgical features of Advent include the omission of the hymn Gloria in excelsis and the use of violet or purple vestments. Pope Innocent III (1198-1216) prescribed black as the color to be used during Advent, but violet had become the preferred color by the end of the 13th century. Before the liturgical changes of the late 20th century, the solemnization of marriage with Mass and Nuptial Blessing was not permitted out of respect for the seriousness of this season. In the same spirit, the placing of flowers and relics of Saints on the altar and the playing of the organ also used to be excluded during this time.

Why such seriousness? Nowadays Advent is hardly noticed amid all the frivolity of our increasingly extended, commercialized American Christmas season. Actually, Advent is a continuation of the liturgy’s end-of-time and judgment themes that have predominated these past several Sundays. The continuity between the final weeks of “Ordinary Time” and Advent is obvious, and we need to think of Advent that way - as being in continuity with the messages about the end and Christ’s coming again as judge, which we have been hearing these past several weeks. (The modern notion that Advent "begins" the liturgical year is an inference from the fact that printed Missals and Breviaries have to start somewhere.)

Looking forward to Christ’s coming to judge the word at the end of time, Advent recalls Israel’s hope for the coming of the Messiah. As Christians, we remember his First Coming among us (which we will celebrate formally at Christmas) to focus on his coming into our lives in the present, his coming to each of us at our death, and his final advent when he will come again in glory to judge the living and the dead. Thus, the magnificent hymn Dies Irae, which for so many centuries was part of the Church’s liturgy of intercession for the dead was originally composed as a sequence for the first Sunday in Advent. We would do well to meditate on its somber sentiments to help us to recover the authentic spirit of Advent amid the frivolity, selfish commercialism, and materialistic extravagance of our American Christmas season.

Recalling the world’s preparation for Christ’s 1st Coming to focus our attention on Christ’s 2nd Coming, Advent captures the experience of where we are now – in this in-between time – between Christmas and the End. Jesus’ instructions "Be watchful! Be alert!” are about what we need to be doing now in order to be the people we hope to be at the end.
Posted by City Father