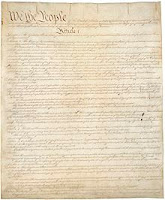 As the media eagerly await President Trump's announcement of which pro-business ideologue he will nominate as the next Associate Justice of the U.S. Supreme Court, by incredible coincidence today is the 150th anniversary of the ratification on July 9, 1868, of the 14th Amendment to the U.S. Constitution (originally passed by Congress on June 13, 1866).

The heart of this most transformative constitutional amendment is Section 1: All persons born or naturalized in the United States, and subject to the jurisdiction thereof, are citizens of the United States and of the State wherein they reside. No State shall make or enforce any law which shall abridge the privileges or immunities of citizens of the United States; nor shall any State deprive any person of life, liberty, or property, without due process of law; nor deny to any person within its jurisdiction the equal protection of the laws.

These two sentences upended eight decades of American constitutional history. The first finally and unambiguously guarantees American citizenship to all born in the United Sates - including African Americans, whose citizenship had been denied by the infamous Dred Scott decision, and the children of more recent immigrants. The second sentence guarantees to all citizens the privileges or immunities of citizens, and guarantees to all in the U.S. due process of law and the equal protection of the laws.

The Amendment's historical context leaves no doubt that it should be read as making constitutionally suspect all forms of racial discrimination, although it took the Supreme Court close to a century to follow through fully on the Amendment's promise in that regard. One of the great scandals of American constitutional history has been the failure to enforce Section 2 of the Amendment: Representatives shall be apportioned among the several States according to their respective numbers, counting the whole number of persons in each State, excluding Indians not taxed. But when the right to vote at any election for the choice of electors for President and Vice-President of the United States, Representatives in Congress, the Executive and Judicial officers of a State, or the members of the Legislature thereof, is denied to any of the male inhabitants of such State, being twenty-one years of age, and citizens of the United States , or in any way abridged, except for participation in rebellion, or other crime, the basis of representation therein shall be reduced in the proportion which the number of such male citizens shall bear to the whole number of male citizens twenty-one years of age in such State.

If that section had been enforced by Congress and the Courts, the second century of our national history would have been very different, and we probably wouldn't be facing the widespread efforts at voter-suppression in Republican-controlled states that we have now. And, without voter-suppression, so much else would be different as well!

Over time, the provisions of the 14th Amendment have been interpreted increasingly expansively to include other categories of persons and other categories of rights. There are obviously very legitimate arguments about how expansively to read these provisions and how to evaluate some of these expansions. These debates will, of course, continue, regardless of who is nominated tonight.