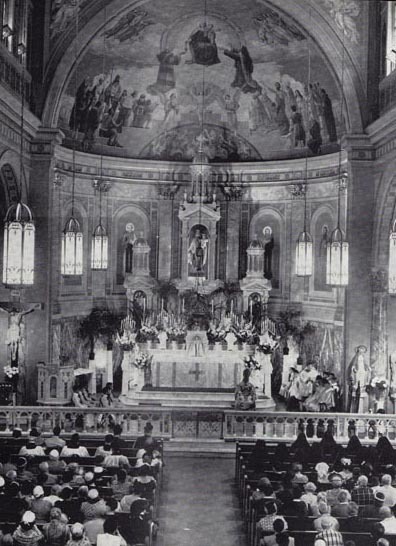 One of my happy summer memories from growing up in the Bronx in the 1950s and early 1960s was the annual festa which we habitually attended every July 16 at the Italian parish of Our Lady of Mount Carmel about a mile east of our home along Fordham Road. Our home parish was a somewhat staid, Irish-dominated enclave. So it was always a treat for my grandmother (and for my mother whose name day it was) to worship at Our Lady of Mount Carmel Church (photo) on the morning of the feast day, shop at the Italian Market on Arthur Avenue, and then return to enjoy "Italian Ices" at the street fair and outdoor procession (complete with dollar bills attached to Our Lady's statue) in the evening.

Our Lady of Mount Carmel parish had been established in 1906 - the same year as my home parish one mile west of it - and its upper Church was built in 1917. Its ministry was primarily, if not entirely, to the large Italian immigrant community in the East Bronx, and at its height in the 1940s and 1950s more than 40,000 Italians made Our Lady of Mount Carmel on East 187 Street their parish.

In the morning on the feast day, we would take the bus to Mount Carmel church for the Pontifical Mass celebrated by Bishop Joseph Pernicone, pastor from 1944 to 1966. Today's "traditionalists" typically experience very solemn celebrations of the ancient liturgy. But, back in the day, what most American Catholics typically experienced were hastily celebrated Low Masses most of the time, Sung and Solemn High Masses only occasionally, Solemn High Pontifical Masses almost never. So for me to attend an annual Missa Pontificalis (even if only in faldistorio) was quite something. (My childhood impression at the time was that it seemed mainly all about repeatedly taking the Bishop's miter off and putting it on!)

Our Lady of Mount Carmel was the title given to Our Lady as patroness of the Carmelite Order, a community which dates back to the era of the Crusades. The first Carmelites were Christian hermits living on Mount Carmel (present-day Haifa), site of Elijah’s famous challenge to the 400 Prophets of Baal (1 Kings 18). The Stella Maris Monastery on Mount Carmel, highlights the Order’s traditional connection to the site. (In modern times, Mount Carmel is also sacred to Bahá'ís, and is the location of the Bahá'í World Centre and the Shrine of the Báb.)

Carmelite friars started establishing foundations in Western Europe in the 13th century. Saint Simon Stock, an early English Carmelite prior general, was thought to have had a vision of the Blessed Virgin Mary in which she gave him the Brown Scapular, which has formed part of the Carmelite habit ever since. My grandmother had a great devotion to the Carmelite Brown Scapular.

Today’s feast was assigned to July 16, because of a Carmelite tradition that the scapular was given on that date by the Blessed Virgin to Saint Simon Stock, who also composed the sequence Flos Carmeli (“Flower of Carmel”) traditionally used in the Carmelite Rite.

Probably the two most famous Carmelite saints were the Spanish Carmelite mystical authors and reformers of the order, Saint Teresa of Avila (1515-1582) and Saint John of the Cross (1542-1591). Paulist Fathers' founder Isaac Hecker was very devoted to both of them, and they are both among the patron saints of the Paulist Fathers.

Of course, I knew about none of that as a kid in the Bronx enjoying the local Italian street fair and discovering a love for the Church's liturgy at Pontifical Mass in that vibrant Italian National parish.