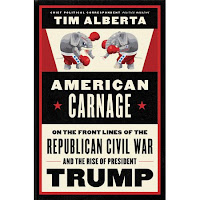 Several years ago, I wrote in this space about Geoffrey Kabaservice’s Rule and Ruin: the Downfall of Moderation and the Destruction of the Republican Party: From Eisenhower to the Tea Party (Oxford University Press, 2012) an account of how the Republican party transformed itself in the second half of the 20th century. A lot has happened since that 20th-century intra-party struggle and transformation, so effectively anticipated by Barry Goldwater's 1964 win in six states of the Old Confederacy. Now Politico's chief political correspondent Tim Alberta has given us an up-to-date 21st-century account of woes that party has brought on itself, from the presidency of George W. Bush to that of Donald Trump.

The book is American Carnage: On the Front Lines of the Republican Civil War and the Rise of President Trump (Harper Collins, 2019). Alberta's main point is made on the first page: "Trump is not the creator of this era of national disruption. Rather, he is its most manifest consequence." And in 2016 Trump was the candidate who most met the moment: "All throughout history the world over, efforts to exploit anxiety have succeeded when there is anxiety to be found: times of war, financial despair, national disunity."

This is the familiar, ongoing story of a long-term fight for the soul of the Republican party - whether to continue to be a Reaganite "conservative" Wall Street Journal party of tax cuts for the rich, free trade, etc., with some socially conservative linguistic window dressing, or to become a "populist" white American identity party, less oriented to the agenda of globalized wealthy elites and more oriented to the agenda of the "base" Republican voters. Alberta recounts in great detail the Republican party's early 21st-century fight with itself, the fight which finally revealed the failure of the Reaganite "conservative" ideology which no longer (if it ever did) corresponded to what the party's electoral constituency really wanted. Even the Tea Party's 2010 fiscal talk turned out to be just an ideological superstructure whose underlying energy is really a toxic brew of cultural and racial resentments.

Starting with the 2008 primary campaign, Alberta takes us through the phenomenon of Sarah Palin ("the early warning bell" for Trump), through Obama's effect on the Republicans' angry, resentful, nativist base,  the rise of the Tea Party, the consequent congressional dysfunction during the Boehner and Ryan Speakerships, the 2012 Romney candidacy ("an exercise in obliviousness"), increasing cultural warfare from both sides of the country's growing cultural chasm, all culminating in the spectacularly successful rise of Trump in "a nation seduced by celebrity and blissfully unaware of its cancerous effects." The 2016 campaign having been revisited in yet another excellent account, Alberta takes us into the familiar terrain of the subsequent travails of the Trump administration and the Republican party's "Faustian bargain" (and that of the party's religious allies).with him.

All of which leaves us where we are now. Trump's enduring legacy, Alberta suggests, has been "his endorsement of America's worst instincts," in doing which "he not only enslaved one half of the country to his callousness, but successfully bade escalation from the other half, plunging all of America and its posterity deeper toward perdition."
Posted by City Father