One Heart and Mind 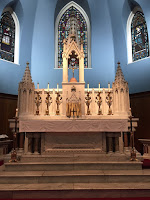 The New Testament Acts of the Apostles famously describes the original apostolic Christian community in Jerusalem as one in heart and mind (Acts 4:32). That image came back to me yesterday at Sunday Mass as I prayed the Collect: O God, who cause the minds of the faithful to unite in a single purpose, grant your people to love what you command and to desire what you promise, that,, amid the uncertainties of this world, our hearts may be fixed on that place where true gladness is found (literally: Deus, qui fidelium mentes unius efficis voluntatis, da populis tuis id amare quod praecipis, id desiderare quod promittis, ut, inter mundanas varietates, ibi nostra fixa sint corda, ubi vera sunt gaudia.) This collect is ancient and used to be that for the 4th Sunday after Easter in the traditional (pre-1969) Roman Rite.

In Acts, the implications of the faithful's unity in heart and mind were clear. No one claimed any possessions as exclusively one's own, and they shared everything in common. While that specific arrangement didn't last, it anticipated the various approximations to it throughout the Church's history and recalled the traditional Christian concept of the universal destination of goods. "Solidarity," as Pope Francis has recently reminded us, "is a spontaneous reaction by those who recognize that the social function of property and the universal destination of goods are realities which come before private property" (Evangelii Gaudium, 189)

All of which led me to wonder while contemplating yesterday's Collect: Is it because we are so divided (despite the Collect's wishful thinking) that we are so in the grip of "possessive individualism," to use C.B. Macpherson's famous phrase (C.B. Macpherson, The Political Theory of Possessive Individualism: Hobbes to Locke, 1962)? Or is it because we are so stuck  in "possessive individualism" that we are so divided? That we are divided - not just within the Church but throughout society - is obvious to any observer. And it seems increasingly evident that more and more people are tailoring their religious beliefs to conform to their political ideologies, thereby reinforcing and compounding such divisions. So much for having our hearts fixed on that place where true gladness is found!

That is hardly a novel phenomenon; but in our era it seems to have attained new salience, as, for example, journalist Tim Alberta recently wrote in American Carnage (p. 456), "students of a faith that stresses the eternal, not the ephemeral, pledged their uncritical allegiance to an earthly leader in exchange for political gratification." How often has that happened?

Political power may be just one more, particularly insidious, form of worldly wealth (also very useful for guaranteeing long-term possession of other forms of worldly wealth). All of which brings one back to Acts' normative, if idealized, image of the apostolic community's unity in heart and mind rooted facilitated by their detachment from possessiveness.