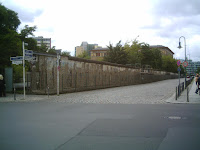 30 years ago tomorrow, on the night the Berlin Wall came down, I was in a convent in Orange County - where the Schools Office staff (of which I had then been a member for just two months) was "on retreat." The opening of the Wall came completely unexpected - as much of a surprise for the international community as for those of us glued to the TV that night in that convent. All of us - our politics, our views of the world, our expectations for the future - had all been formed and conditioned by the Cold War.

My generation had been caught up in the fear of communism and of nuclear war, a danger brought home to us by the semi-annual civil defense drills, when – at the sound of the air-raid siren - we would all crawl under our desks if at school, or run and hide in a nearby building if we were playing in the park. I remember one occasion, when the drill occurred in summer, my mother wouldn’t let me go out to play until after the drill was done with. So I watched from our apartment window as everyone scurried to seek shelter and then followed with great interest the situation of some elderly people who had been sitting on the park bench and who didn’t move until the police came and forced them to do so. I remember speculating whether they just figured they had no reason to run and hide, since, being old, they would probably die soon enough anyway!

The Cold War had its moral complexities as well. In September 1961, for example, a certain Father McHugh had ignited quite a controversy with an article in America Magazine, “Ethics in the Shelter Doorway,” in which he characterized neighbors seeking admittance to one’s private fallout shelter as “unjust aggressors” to be “repelled by whatever means will effectively deter their assault.” Sometime soon after that article's publication, it was discussed at one of our frequent extended family gatherings in our Bronx apartment. Now it is safe to suggest that no one in that room that evening had ever read America. I doubt any of us even knew of that publication’s existence! But this priest’s views had quickly become widely known. (Historian Arthur Schlesinger later alleged that, in a Kennedy Administration discussion on fallout shelters, Attorney General Robert Kennedy supposedly said “we can just station Father McHugh with a machine gun at every shelter.”) So it was that the debate about Father McHugh’s views had even made it into our family gathering. (Not that any of us had a private family shelter of our own to give the debate relevance!) As for Father McHugh’s belligerent attitude towards neighbors who might seek admission to one’s shelter, my father would have none of it. He categorically said he would not refuse admittance to someone seeking entrance to a shelter and – with no theological education – completely dismissed Father McHugh’s case and argued instead the case for compassion and human solidarity (without, of course, ever resorting to such language). A silent spectator in the adults’ debate, I thought my father showed good commonsense – and a great moral sense.

Yet it truly was a really scary time. How well I remember Monday, October 22, 1962! My mother had already left for work when I got home from school that day. But she called home from Macy’s to tell me to be sure to watch President Kennedy’s talk on TV that evening to find out if we were going to war. That speech was, of course, Kennedy’s famous opening salvo in what we now know as the Cuban Missile Crisis. That crisis ended well for the U.S. – surprisingly well, actually. But it was, as I said, a very scary time. Lots of people went to confession that Saturday!

Fear foolishly would inhibit me from flying to West Berlin in 1970, when, as a college student, I spent the summer in Europe studying German in Austria. The idea of actually flying over Communist East Germany to get to Berlin just scared me. So another 35 years would pass before I would get to Berlin. By then, of course, the Wall would be gone and Berlin would be the reunited capital of a post-Cold War reunified Germany.

The year 1970 also saw the publication of Andrei Amalrik's prophetic Will the Soviet Union Survive until 1984? which we duly read in class. It was inaccurate in some of its predictions (for example, a military conflict between the USSR and China) and of course the Soviet Union did not collapse until several years later, but Amalrik's basic scenario came surprisingly close to the eventual outcome. I remember arguing about the book with some other students who were convinced the rest of the world would never allow a reunited Germany, which was also conventional wisdom - until, of course, the Wall came down and with it conventional wisdom, as Germany was indeed rapidly reunited.

So entrenched was the Cold War in our experience and our expectations that it was almost as if a completely new world had come into being by the time the Soviet Union completely dissolved on Christmas Day 1991. Hence such strangely utopian-sounding expressions as "the new world order" and "the end of history." History did not "end," of course, and "the new world order" increasingly came to resemble aspects of older world orders.

In his monumental Postwar: A History of Europe Since 1945, Tony Judt wrote:

"But with the passing of the old order many longstanding assumptions would be called into question. What had once seemed permanent and somehow inevitable would take on a more transient air. ... In retrospect the years 1945-89 wold now come to be seen now not as the threshold of a new epoch but rather as an interim age: a post-war parenthesis, the unfinished business of a conflict that ended in 1945 but whose epilogue had lasted for another half century. Whatever shape Europe was to take in the years to come, the familiar, tidy story of what had gone before had changed forever."

And so it has turned out - not just for Europe but for the US and for all of us whose experience had been defined by the Cold War division of Europe.

And, while no one would want to go back to that divided world - especially those whose unfortunate fate it had been to be born behind the Wall on the eastern side of that divide - the new post-Cold-War world has been a troubled and confusing one, as conflicts both old and new have replaced the post-war simplicities with results hardly less frightening.

Indeed, for all the problems associated with the 20th-century's herculean politics motivated by grand historical narratives, not only has their loss not heralded an entirely unmitigated improvement but something authentically memorable has been lost as well. As Francis Fukuyama himself acknowledged in his infamous 1989 article on the so-called end of history, "the worldwide ideological struggle" had "called forth daring, courage, imagination, and idealism" - all of which seem now in such amazingly short supply.

(Photo: A photograph I took of a preserved remnant of the Berlin Wall on August 13, 2005 - the Wall's 44th anniversary.)