Church in a Post-Pandemic World 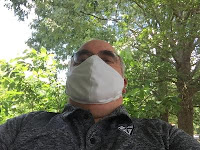 Church doors have been open again for some time, and certainly some of us are very happy to be back, even if it means we have to wear masks, sit in designated sections, sanitize our hands, and do any number of other necessary but burdensome things. Sunday attendance hovers around 1/3 what it was a year ago. The question so many are asking, of course, is what about the other 2/3? When will they come back? Will they come back? And, underlying that, there is the other question we also ought to be be asking: What kind of Church will we be to come back to?

There will obviously be superficial changes that many may welcome while others deplore. Such 20th-century revivals of long-abandoned ancient practices, such as Communion from the chalice and congregational participation in the exchange of peace, may well be gone for good - as may such liturgically dubious Protestant imports as hand-holding at the Lord's Prayer. For all the fuss they engendered (and admittedly intense advocacy in some quarters), how little such practices actually added is evident from how easily we have adapted to their absence.

We are what we do. Rituals and symbolic actions are important. But such superficial 20th-century accretions have never been at the heart of the Church's life.


More problematic, of course, has been the loss of congregational singing.  Hopefully, we'll eventually find a reasonably safe way to "pray twice" again!

On the other hand, assembling on Sunday - whether Communion is received under two species or only one or not at all - assembling on Sunday has been at the heart of the Church's life since apostolic times. For the liturgy, as Vatican II taught, "is the outstanding means whereby the faithful may express in their lives, and manifest to others, the mystery of Christ and the real nature of the true Church" (Sacrosanctum Concilium 2).

“Every Sunday is a great Feast and a time of joy," Thomas Merton wrote in his Journal on October 1, 1939, at a moment in world history hardly festive or joyful, even compared to today's tragic atmosphere.

Admittedly the pathologies of modernity - from Sunday store openings to Sunday sports - had already decisively undermined the Lord's Day, long before the pandemic.

It may be that those who miss Mass most intensely will eventually come back to something like regular Sunday attendance, but the very fact that there is such widespread anxiety that many others may not is truly telling. It may be a mistake to hang too much on the hook of Sunday Mass; but it really is the only ordinary opportunity for religion to compete with secular priorities, if only for one feeble hour. And we may be losing that one hour now even faster than we expected. If religious sensibility is formed and then nourished primarily by and through the liturgy, what will be the effect of liturgy's absence on the strength of religious sensibility, indeed on its existence? Has religion's increasing absence from society during this period of pandemic actually confirmed a long-term trend in that direction - and maybe even have accelerated it?

Crises can, of course, contribute to religious revival. In his memorable Postwar: A History of Europe since 1945, for example, Tony Judt recognized how religion (particularly Catholicism) "basked in a brief Indian summer of restored authority" after the Second World War. Judt ascribed Catholic success in Europe in the immediate post-war period to the Christian Democratic parties connected with it and, even more, to the sense it then offered "of continuity, of security and reassurance in a world that had altered violently in the past decade and was about to be transformed even more dramatically in the years to come."

Continuity, security, and reassurance may be just as much needed now as then, but religious institutions seem somehow less effectively equipped to offer them. At one ideological extreme, a quasi-integralist reactionary religious politics may seem attractive to some, but even that seems increasingly to be more about politics and less about religion, while in the cultural mainstream religion's apparent absence during the pandemic may have amplified its already evident absence and silence in the public square. And therein may lie the unique challenge of out time.


And yet this pandemic challenges us - as perhaps few other world events recently have - to focus on the care we owe to ourselves and to one another in our common home. "See how they love one another" was how some described the early Christians. We all know that whether as individuals or as a Church community we have not always lived up to that as well as we should. But we are being especially challenged to do so today. As citizens, we understand that living in society, being in community with others, imposes burdens. As Christians, we believe that the love we should have for one another will make those burdens more bearable.

As Bishop Robert McElroy of San Diego recently said in his homily at the ordination of a new Auxiliary Bishop: "The pandmeic has worn us down and made us fearful of the way forward. ... Patterns of parish life that have sustained community and the proclamation of the Gospel for decades have been ruptured by the isolation of these months and the atomization of all social life that we have witnessed. there is a great danger that that pandemic is creating a culture of increased disengagement within the life of the Church that will persist long after a vaccination is found. ... There is  no more important work for the Church in the coming months than consoling those who have been broken and bringing to our world the understanding that God provides the only enduring foundation for the journey of life on this earth."