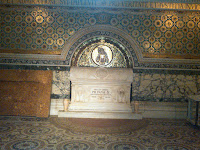 150 years ago today, under the imminent shadow of the Franco-Prussian War (soon to be followed by the Italian conquest of Rome), the First Vatican Council (1869-1870) adopted the Dogmatic Constitution Pastor Aeternus, which famously defined the Infallibility of the Pope, much to the delight of Blessed Pius IX (Pope 1846-1878) and many others, for whom this was, so to speak, the jewel in the maybe much more important crown of papal primacy.

That the Roman Pontiff, when he speaks ex Cathedra, that is, when exercising the office of Pastor and Teacher of all Christians, through his supreme Apostolic authority, defines a doctrine of faith or morals to be held by the universal Church, by divine assistance promised to him in blessed Peter, possesses that infallibility, which the divine Redeemer willed his Church in defining doctrine of faith or morals; and therefore such definitions of the Roman Pontiff are irreformable of themselves, and not  from the consent of the Church.

It is commonly claimed that Vatican I resolved the relationship between the Pope and the Bishops basically in favor of the Pope, leaving it to Vatican II (1962-1965) to balance Vatican I with its renewed emphasis on the episcopacy, both on the level of the local Church and also universally through the concept of episcopal collegiality. There is certainly something to be said for that interpretation, as far as it goes. Yet it remains undeniably the case that the Church is today probably about as pope-centered as it is possible to be. To the outside secular world, it often seems that the Pope is the Church. Certainly he is her personification and spokesman, in a way that no one else is and that (at least under ordinary circumstances) it seems can be shared with no one else. Within the Church, the ordinary Catholic may experience the Church most personally and directly at the parish level, but beyond the parish it is again primarily the Pope who represents and speaks for the Church for most Catholics. Most may never make it to Rome. But, for those who do, attending a papal audience or Mass in Saint Peter's or even the Sunday Angelus in the square - even watching such events on TV - is likely to seem way more exciting than anything that happens on the local level. I remember some 25+ years ago, when a local bishop planned a diocesan youth day (inspired by his experience of the recent WYD in Denver) a religious sister warned that he was not the pope and wouldn't have a helicopter to arrive in! Of course she was correct. Having attended several papal events in Rome and elsewhere (including WYD in Cologne), I know well the excitement and enthusiasm that the papal presence inevitably generates.

Some of this is inherent in modernity and the papacy's successful employment of modern media and of celebrity culture. It is also inherent in modern governance which is technologically capable of a degree of centralization and reaching into all aspects of local life, which we typically take for granted now, but which would simply have been impossible in earlier ages. Accordingly it has rightly been emphasized how Infallibility was itself, so to speak, the jewel in the ultimately much more important crown of papal jurisdictional primacy, which was in many ways the great practical accomplishment of the modern papacy in the 19th and 20th centuries.

The Church of the 19th and 20th centuries, internally united and strongly centralized by papal jurisdictional primacy proved powerfully formidable when faced with the threats to her freedom from secular society, especially the rising power of modern national states. But the familiar formula of Vatican I, ex sese, non autem ex consensu Ecclesiae, a direct reference to the infamous Gallican Articles of 1682, was also directed internally - as, for example, Shaun Blanchard has argued, as a response to "the crucial (and in some cases still unresolved) theological and ecclesiological struggles within the Catholic Church itself in the early modern period," prior, that is, to the external threats posed by the French Revolution and what followed. [See "The Twists and Turns That Led to the First Vatican Council," Church Life Journal, https://churchlifejournal.nd.edu/articles/the-twists-and-turns-that-led-to-the-first-vatican-council/ ]

In the wake of Vatican II and the internal turmoil that followed within the Church, it can be argued that the ecclesiological concerns of the 18th century seem to have returned from their long hibernation during the ultramontanist winter that followed Vatican I, facilitated for some by an ideologically idealized interpretation of Vatican II ecclesiology.

Yet once again external social realities and political and cultural threats loom large on the horizon as they did in 1870. Inevitably there is only one component of the Church's constitution that can effectively represent the Church to the world, that can effectively make the Church's case to the world, and also (hopefully if perhaps paradoxically) that can bring the world's case to the Church's needful attention in turn. In a certain sense, that seems to be what the present papacy is attempting to accomplish. Certainly Laudato Si' stands as a shining example of the papacy's unique capacity to bring the world's case to the Church's attention. (How successfully is another question, clearly not quite answerable as yet.)

Whatever one makes of the interesting spectacle of the current ultra-ultramontanism of the Church's "progressive" post-conciliar factions, perhaps it reflects a belated acknowledgment of the reality that there seems no other effective option for being Church in the contemporary world (just as there are increasingly no effective alternatives to centralized bureaucratic governance in the secular world).

And wasn't that more or less what was recognized 150 years ago?