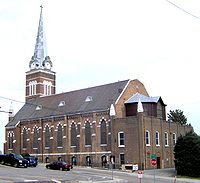 The sky threatened, and a few drops actually did fall, but that didn’t deter the celebration or dampen anyone’s spirits at Immaculate Conception Church’s 3rd annual “Irish Fest” fundraiser. Nor did the unremitting heat and humidity that has blanketed Knoxville (and so much of the eastern United States) since my arrival diminish the festivity of the occasion.

During the Irish Fest, I joined a “Tour of the Church,” conducted by one of our parishioners, and even got to participate in a spirited discussion about the beautiful windows and the as yet mysterious identity of the “unknown bishop” in one of the church’s windows. In my previous posting, it was usually my job to conduct such tours, and so it was a doubly new and exciting experience for me to be on the receiving end of such a tour. As I have been learning more about my new parish in my few weeks here, I have learned that our “Church on Summit Hill” has had quite a quite a distinguished history.

The original 1855 parish church had been erected on Summit Hill, its entrance fronting what is now Walnut Street (then known as Crooked Street). Summit Hill was soon to be the site of military action in the Civil War. In September 1863, The Union Army marched into Knoxville and occupied the city. There was a Union artillery position right near the site of the church. During the unsuccessful Confederate attempt to retake Knoxville in November 1863, a house close to the church was hit by a shell and burned to the ground, but the church itself made it through the war undamaged.

Ground was eventually broken for the current church in 1883, and the new church was ready to be officially dedicated by the Bishop of Nashville on September 19, 1886. So the present parish church has been in continuous use – including the original pews - for almost 124 years! As I look ahead to our church’s 125th anniversary in 2011, I find myself increasingly fascinated by accounts of the generations of parishioners who have worshipped here and by the treasure of history and beauty they have left for today’s downtown Knoxville.
Posted by City Father