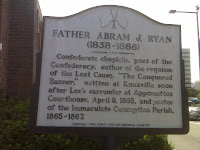 Two official State of Tennessee Historical Markers flank the front entrance to Immaculate Conception Church in Knoxville, TN. The first recalls the Civil War, when Summit Hill was the site of Union fortifications during the 1963 Battle of Knoxville. The other, on the corner of Vine and Walnut, honors Fr. Abram Joseph Ryan (1838-1886), the famous Catholic poet and Confederate patriot, who served as pastor of Immaculate Conception from 1865 to 1867. Across the street, the residential row houses at 415 West Vine are named “Ryan’s Row,” in the former pastor’s honor.

Ranked as perhaps only a minor American poet today, Fr. Ryan was widely read and his poetry highly esteemed throughout the South in the post-Civil War period, and his religious poetry was very popular among Catholics. He himself, however, professed a rather modest view of his efforts: “These verses (which some friends call by the higher title of Poems – to which appellation the author objects) were written at random – off and on, here, there, anywhere – just when the mood came, with little of study and less of art, and always in a hurry.” However hurried, his output was impressive. As pastor, I have inherited a nicely leather-bound 1908 collection of my famous predecessor’s complete poems, and I count some 131 poems (a few of them posthumously published), some short, but many quite lengthy. The overwhelming majority of Fr. Ryan’s poems are religious in inspiration.

After a period of distinguished service as a chaplain in the Confederate Army, Fr. Ryan came to Immaculate Conception as pastor in 1865, shortly before Lee’s surrender to Grant at Appomattox, the event that inspired what was perhaps his most famous poem, The Conquered Banner. Reprinted repeatedly and memorized by Southern school children, that poem made him a household name in the post-war South. Fr. Ryan gave an original hand-written draft of the poem to the Ricardi family of Immaculate Conception Parish. After remaining in the family for several generations, it is now in the historical collection of the Knoxville Public Library.
Posted by City Father