A Man of the Church 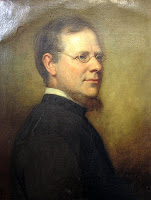 On this day in 1849, a 29-year old German-American, New York born, convert to Roman Catholicism, Isaac T. Hecker, was ordained a Redemptorist priest at St. Mary’s Church, Clapham, the Redemptorists’ new foundation in London. Sent there to complete his seminary studies, Hecker was part of the first Redemptorist community in London, which at that time included an Austrian, a Russian, and a Belgian.

Hecker’s road to the priesthood had been arduous. Not unlike Christian history’s most famous seeker, Saint Augustine, Hecker’s journey to conversion eloquently exemplifies the spiritual search at its best. Like Augustine, he examined many of the leading intellectual and religious currents of his time, before finally finding his permanent religious home in the Roman Catholic Church. The very personal story of his spiritual search, of his intense attention to his own inner spiritual sense, certainly speak to the spiritual longings of our own spiritually hungry century, with its legions of souls commonly described as “spiritual but not religious.” Hecker too was “spiritual but not religious” for most of the first 25 years of his life. What was – and remains – significant about Hecker, however, was precisely that he did not remain that way. Fundamental to this first period of his life was his recognition of the indwelling Holy Spirit of God acting to call him out of himself and into the Church. For Hecker, seeking was never an end in itself. The point of seeking is finding. Hecker found fulfillment in the Catholic Church and never desired to look farther. Rather, he devoted himself to helping others – especially other seekers, such as he himself had been – to find the truth in the Church.

In 1845, less than a year after his reception into the Church, Hecker met two other new Catholics, James McMaster and Clarence Walworth, both former Episcopalians, who were planning to travel to Europe to enter the Redemptorist novitiate in Belgium. Hecker decided to join them. He took an overnight train to Baltimore, showed up at the Redemptorist house at 4:00 a.m., and met with the Provincial after morning Mass. Having persuaded the Provincial that he knew enough Latin, he was accepted . Taking the morning train back to New York, he said a quick goodbye to his family, and set sail for his new life in Europe.

A week earlier, in a letter to another recent convert, Orestes Brownson, Hecker had expressed “the need of being under stronger Catholic influences than are so far as my experience goes, in this country.” The Redemptorists provided him the immersion experience he felt he needed in European Catholicism, and Hecker adapted enthusiastically to Redemptorist religious routine and ascetical practices. He experienced serious difficulties with his studies, however, what he himself described as a “helpless inactivity of mind in matters of study” that made him “a puzzle” both to himself and to superiors. Convinced that he had a vocation to labor for the conversion of his non-Catholic fellow countrymen, however, he successfully persuaded his superiors that, if left to study at his own pace, he could yet “acquire sufficient knowledge to be ordained a priest.”

So, from Belgium and the Netherlands, he went to England to finish his formation at the Redemptorist house in Clapham, where, on October 23, 1849, he was ordained a priest. In 1851 he was sent back to the United States as part of a new English-speaking, Redemptorist mission band, which included Clarence Walworth and two other American Episcopalian converts to Catholicism, Augustine Hewit and Francis Baker.

Their first mission was at St. Joseph’s in Greenwich Village, New York City – the first ever English-language mission in the United States. Walworth, widely regarded as the nation’s foremost Catholic preacher, and Hewit generally gave the principal mission sermons. Hecker heard confessions and gave the catechetical instructions after morning Mass and also the evening instruction on the rosary, which he delivered with such passion that his colleagues called him “Fr. Mary.”
Parish missions were intended to elevate the spiritual life of the faithful and reconcile back to the sacraments those who had lapsed. By challenging Catholics to a higher standard of moral behavior – for example, by reducing alcohol abuse – missions contributed to what Hecker, in a letter to Brownson, called “a higher tone of Catholic life in our country.” one consequence of which, he hoped, would be to make the Church more attractive to non-Catholics. Apparently, Hecker already understood that any successful mission to non-Catholic America presupposed an effective mission and ministry within the American Catholic community.

While working on the missions Hecker produced two apologetic books, Questions of the Soul (1855) and Aspirations of Nature (1857), “to explain the Catholic religion in such a manner as to reach and attract the minds of the non-Catholics of the American people.” He hoped that “many of the great body of the American people,” if shown the way Divine Providence had led him to the Church, “might in this way be led also to see the truth.” Selling some 3000 copies in 1855, Questions of the Soul established Hecker as one of the leading spokesmen for Roman Catholicism in the United States.

Hecker’s life as a priest was characterized by his enthusiastic embrace of the Church to which the first, searching period of his life had so earnestly led him and to which he now so wholeheartedly devoted himself. This commitment to the Church as the institutional expression of the presence and providential action of the Holy Spirit sustained him in his priestly ministry, despite difficulties. His expulsion from the Redemptorists in 1857 (which eventually led to his founding the Paulist Fathers in 1858) was “the source of the deepest affliction” to him, but he believed “that these things were permitted by Divine Providence” to position him “to further the work of God.” He was truly, as New York’s Edward Cardinal Egan wrote (Catholic New York, November 9, 2006), “a man of the Church.”
Posted by City Father