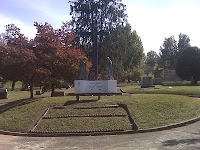 November is supposed to be the month when we especially remember the dead and think intentionally about our own mortality. It’s a late autumn thing to do. But I got a bit ahead of schedule today!

The day began with a funeral. It was my third funeral at Immaculate Conception, but my first ever burial at Calvary Catholic Cemetery – the old cemetery just a few miles away, which is owned by immaculate Conception parish. I haven’t seen too many parish cemeteries. I’ve done burials at St. Raymond’s in the Bronx, of course, and I’ve been to the parish cemetery in New Jersey, where the Paulist Fathers formerly at Mount Paul are now buried (and which will presumably someday be the site of my last Paulist assignment). The cemetery here is much older and smaller, but quite attractive precisely as an old, historic , traditional cemetery.

The burial service was brief, but concluded with the playing of taps and the presentation of the flag to the deceased brothers. It got me thinking about the passing of the World War II generation, rightly remembered (in Tom Brokaw’s memorable expression) as “the Greatest Generation.” My father has been dead 11 years already, and my uncles even longer. Soon, there will be no one left from that “Greatest Generation” – just when our society could really use people like them and what they did and accomplished. Compared to them, my “baby Boomer” generation seems to have made quite the mess of things – exceeded only, perhaps, by the post-Boomer generation now in political power!

Such solemn reflections, admittedly more suited to a gray November day than a bright colorful October afternoon, were still with me when I left the parish office in late afternoon to go home and prepare for my evening meeting. As I turned left from Broadway onto Central Street, I suddenly found myself faced with a speeding, on-coming car coming at me in my lane, apparently being chased by a police car. Luckily for me, no one was simultaneously turning right onto Central from the southbound side of Broadway. So I was able to maneuver quickly into the right lane and thus escape being hit head-on by the speeding car. From the comparative safety of that right lane, I watched in amazement as that car kept going, pursued by one, then a second, police car. As I drove north on Central the remaining distance, I could hardly help recalling the prayer recited just a few hours earlier at the end of the funeral:

Lord God, whose days are without end and whose mercies beyond counting, keep us mindful that life is short and the hour of death unknown. Let your Spirit guide our days on earth in the ways of holiness and justice, that we may serve you in union with the whole Church, sure in faith, strong in hope, perfected in love. And when our earthly journey is ended, lead us rejoicing into your kingdom, where you live for ever and ever. Amen.
Posted by City Father